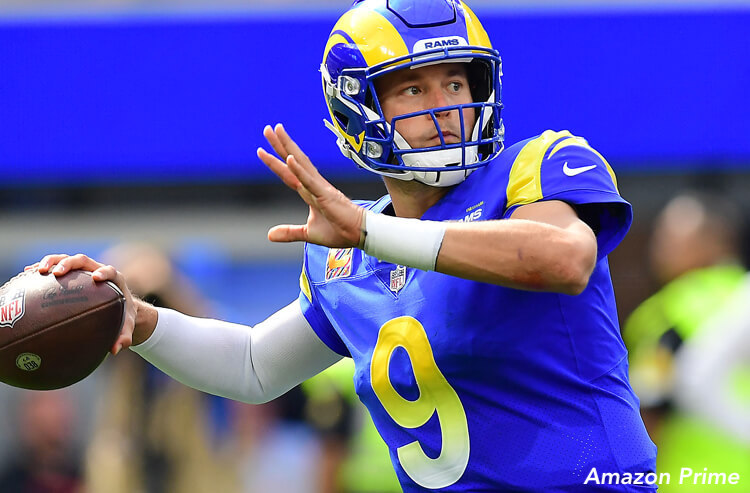 Seattle Seahawks vs. Los Angeles Rams: How to Watch, Listen and Live Stream on October 7, Time, TV, radio, live stream, and everything else you need to know to follow the Week 5 Thursday night game at Lumen Field.

The Seattle Seahawks play the Los Angeles Rams for Week 5 of the 2021 regular season. Kickoff is at 5:20 P.M. PT on Thursday, October 7, 2021. Here’s how you can watch, listen to, and follow the action as it unfolds.

The Los Angeles Rams (3-1) hit the road for a NFC West battle against the Seattle Seahawks (2-2) on Thursday, October 7, 2021 at Lumen Field. We have more info below, and that includes how to watch this game on FuboTV.

How to Watch Rams vs Seahawks Live Stream Free

FOX 13 will feature Joe Buck (play-by-play) and Troy Aikman (analyst), with Erin Andrews and Kristina Pink on the sidelines.

Radio: 710 ESPN Seatle KIRO Radio 97.3 FM & Westwood One Steve Raible (play-by-play) and Dave Wyman (analyst) will call the action for the Seahawks flagship station, with John Clayton and Jen Mueller reporting from the sidelines at Lumen Field. A complete list of Seahawks Radio Network affiliates can be found right here.

Dave Pasch (play-by-play) and Rod Woodson (analyst) will be live on Westwood One for the national broadcast.

For fans in the Seattle market, the radio call of the game can also be heard in the Seahawks mobile app and online at Seahawks.com.

In addition to the national stream on Amazon, for fans in the local market, the game will be available to watch on mobile devices via the Seahawks mobile app and Seahawks.com, as well as the NFL app and Yahoo! Sports (mobile browser or app) regardless of mobile provider.* Seahawks.com, the Seahawks mobile app, and Seahawks social media channels will provide game coverage throughout the day. Follow the Seahawks on Twitter, Instagram and Facebook for live gameday updates, videos and behind-the-scenes photos.

If you miss the game live or just want to watch it again, NFL Game Pass is currently offering a free seven-day trial. With NFL Game Pass you can replay every game of the NFL season with full broadcast replays, condensed games, or review the all-22 coaches film. Access is available across all devices.

In 2022, Prime Video will become the exclusive home to 15 Thursday Night Football games per season. Before that, Prime Video will kick off NFL coverage with a 12 game schedule, including the NFL Wild Card playoff game in January.

Thursday Night Football on Prime Video starts this Thursday, October 7 at 8:20 pm ET when the Los Angeles Rams travel to take on the Seattle Seahawks.

2021 is the final year of the NFL’s existing TNF tri-cast model. Beginning in 2022, Prime Video will become the exclusive home to 15 Thursday Night Football games per season.

“This season we are adding several new faces to our best-in-class Thursday Night Football broadcast team,” said Marie Donoghue, vice president of global sports video at Amazon. “Fans will have even more opportunities to engage with the game each week through multiple viewing options on Prime Video and Twitch, an extensive slate of supporting NFL programming, and immersive gameday experiences like X-Ray and Next Gen Stats.”

Storm-Kremer on Prime Video: Andrea Kremer and Hannah Storm bring a unique voice and viewpoint to every game.

Scout’s Feed on Prime Video and Twitch: Bucky Brooks, Daniel Jeremiah, and Joy Taylor dive deeper into the X’s and O’s, offering fans a different perspective on the action through the lens of former NFL scouts.

NFL Next Live on Twitch: Andrew Hawkins and Kimmi Chex are joined by a rotation of analysts including Aqib Talib, Nick Mangold, and current NFL star Malcolm Jenkins, offering a unique viewing experience that engages new and different audiences and provides an alternative to a traditional NFL broadcast.

NFL Next Show :NFL Next Presented by Verizon returns to its familiar spot on Thursdays at 4 p.m. PDT, beginning October 7. Hosted by NFL Network star Kay Adams, the show features two-time Super Bowl champion Chris Long, former NFL receiver and Academy Award-winner Andrew Hawkins, and former NFL scout Daniel Jeremiah. NFL Next brings together compelling moments and stories from the prior week’s games, while amplifying the social media pulse of the league and providing an in-depth look at each night’s game utilizing the power of Next Gen Stats powered by AWS.

Catch Every Moment with X-Ray: X-Ray for TNF gives fans real-time access to live stats and data previously only available to coaches and announcers, allowing fans to understand the game without taking their eyes off the screen. Fans watching TNF on Fire TV can also use X-Ray to shop for officially licensed NFL merchandise from their favorite teams—all without leaving the app.

You can learn more about 2021 NFL games on Prime Video (and other ways to stream games this season) via our recent video.

The last time these teams met, the Rams traveled to face the Seahawks in the 2020 Wild Card round. John Wolford entered as the starter but left the contest in the first quarter with a head injury. Jared Goff stepped in, doing just enough to defeat Seattle, 30-20.

Stafford is a vast upgrade over both Wolford and Goff, but he is coming off his worst game as a Ram last week. The team was riding a high after knocking off the defending Super Bowl champion Tampa Bay Buccaneers. I believe the Rams bounce back and look to stifle their divisional foe.

Wilson may be the better QB, but he has been sacked 8 more times than Stafford. Aaron Donald and Leonard Floyd should have a field day with Seattle’s OL. Furthermore, Ramsey has largely held Metcalf in check when the two have faced off. Lockett will cause defensive fits, but he is a little banged up. The Seahawks have an efficient rushing attack, but if the Rams get out to an early lead, they won’t have a choice but to throw.

Mr. Unlimited will put points on the board, but the Stafford-McVay-Kupp mind-meld will prove too much to overcome. Also, Stafford needs a new nickname. It likely won’t stick, but “The Tinseltown Terror” has a nice ring to it.

How to watch Downton Abbey: A New Era Free Streaming At Home: Is ‘Downton Abbey’ on HBO Max or Netflix?

Best Games to Get Inspiration and Improve Writing Skills

Hybrid Working Could Save Santa Clarita Residents Money In The Future

What to Expect from Laser Hair Removal

Online Casinos For Real Money – How To Choose The Best