Heavy rains in the Santa Clarita Valley wreaked havoc over Friday night and Saturday morning causing an increase in traffic collisions, mudslides and even a lightning strike on private property.

It even snowed in some areas such as the Grapevine which prompted Interstate 5’s closure around 3 a.m. It has since been reopened as of 9:20 a.m.

There was also a mudslide near Spunky Canyon Road and San Francisquito Canyon Road around 9:20 a.m. where a boulder hit a fire patrol car that was parked, knocking it over on its side.

Fire Patrol No. 78, based on San Francisquito Canyon Road, was assisting another individual with a traffic collision in the area when the mudslide occurred.

One fireman was taken to Antelope Valley Hospital for minor injuries as a result. He has since been released and is back on the front lines of the battle against nature.

Another vehicle was also caught in the mudslide although no one was injured from that collision.

The mudslide occurred as a result of the rain falling on a burn area that had recently lost its vegetation due to the recent fires.

San Francisquito Canyon Road was closed in that area in both directions as of 11 a.m. according to the L.A. County Fire Department.

Also, it is important to keep in mind that is not the only road closure in SCV due to the rain.

Iron Canyon Road that leads to a private community in Santa Clarita is also closed.

Although, it could have been much worse in that area.

Approximately two weeks ago, the Los Angeles County Department of Public Works anticipated potential mudslides and built rail and timber structures to stop them from getting through.

One rail and timber structure in that area is seven feet tall and holding back 18,000 cubic feet of mud that had the potential to threaten nearby homes.

“As a result of this, (the houses) weren’t affected very much at all,” said Steven Frasher, a spokesperson for L.A. County Department of Public Works.

According to Frasher, there are two timber and rail structures near the top of Iron Canyon Road to stop mudslides.

A 2.3 mile stretch between Vasquez Canyon Road and Big Oaks Lodge at Bouquet Canyon Road was also closed in anticipation of the rain. It is expected to be reopened by 12 p.m. according to the L.A. County Department of Public Works. No mudslides were reported in that area.

A Saugus resident also reported that a tree in the yard was struck by lightning Saturday night.

“I thought our vehicle exploded on our driveway,” said Khardine Silver in a message to The Signal.

Fortunately, the rest of the holiday weekend is expected to be clear of rain according to the National Weather Service website. 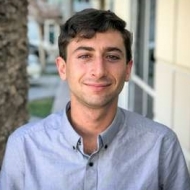