Four teen boys were detained by sheriff’s deputies in Valencia Tuesday afternoon and are suspects in the overnight armed robbery of a Valencia convenience store in which a 38-year-old clerk was stabbed multiple times.

Deputies with the Santa Clarita Valley Sheriff’s Station spent Tuesday morning looking for four robbery suspects wanted in the holdup of a Circle K store on McBean Parkway and Decoro Drive at 2:45 a.m.

Shortly after 12:30 p.m., deputies in more than dozen sheriff’s cruisers swiftly descended on a Valencia neighborhood and, specifically, onto a residential street that backs onto the plaza where the robbery occurred.

Deputies arrested the suspects in the area of Woodfield place and Hathaway Place, about 200 feet from the Circle K and the strip plaza.

Responding deputies found a “group of young people congregated in the front yard of the home,” they said.

The teens scattered in all directions when they saw the deputies.

Deputies took four teen boys into custody “in conjunction with the robbery of a Valencia convenience store that occurred early Tuesday morning.”

“During the commission of the robbery, a 38-year-old store employee was stabbed multiple times by one of the suspects,” sheriff’s officials said in the news release.

Three of the suspects were placed in the back of three separate sheriff’s vehicles.

A fourth suspect was treated for an injury to his arm with what appeared to be a temporary orange arm cast, secured to a stretcher and placed in the back of an ambulance.

Paramedics were dispatched to the 27600 block of Woodfield Place for reports of a man an injury to an “extremity.”

“This call was for someone with an injury to their extremity,” Inspector Gustavo Medina of the Los Angeles County Fire Department said. 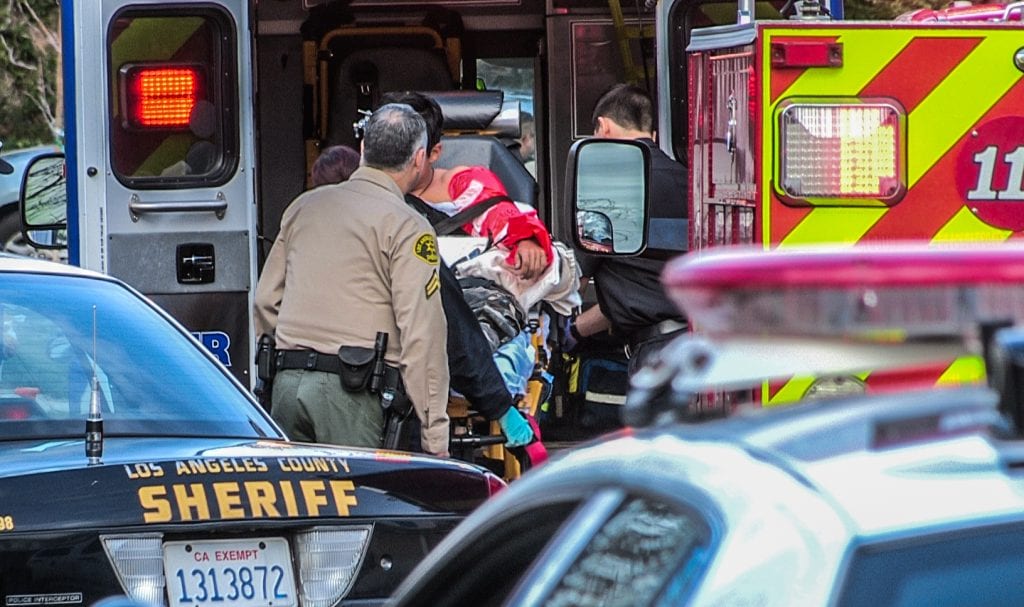 Paramedics treated the young man and took him to the hospital at 12:40 p.m.

According to unconfirmed reports at the scene, the man suffered his injury in a fall from a fence he was trying to climb.

During the robbery, a convenience store clerk was stabbed multiple times when he tried to fight the robbers.

“We’re looking for four suspects, between the ages of 18 and 20 something,” Price said.

“They robbed the clerk of beer and cigarettes,” he said. “The clerk was stabbed multiple times as he fought with the suspects.”

Members of the sheriff’s robbery and assault team – Career, Offender, Burglary, Robbery Apprehension Team, or COBRA – are investigating the incident.

Paramedics were dispatched to reports of a stabbing at 2:52 a.m., at the 27000 block of McBean, between Summerhill Lane and Skycrest Circle Drive, a block north of the Circle K, Fire Department Inspector Joey Marron said.

“One patient was transferred,” he said.

A woman identifying herself as the victim’s aunt, contacted The Signal from New Jersey where news of the incident reached family members.

“We thank God he is alive,” she said.

More details about the case are expected to be released soon.