Amy Woods got a call last year from the Los Angeles County Department of Children and Family Services, informing her that the mother of her 2-and-half-year-old foster son had just given birth to another boy. The newborn needed a home: Would she take him in?

Woods was given 24 hours to make the decision, but financially the choice had already been made for her.

The $707 monthly stipend wouldn’t be enough to pay a full-time nanny, and she didn’t want to leave an infant at a child care center, even if it were possible to find one on such short notice. If subsidies were available, they could take months to arrive. And taking more time off from her job as a special education teacher in Covina was out of the question. So her son’s biological brother went to another family.

“I had no way to care for him and still afford our lives with two kids and the bills and the rent,” she says now. 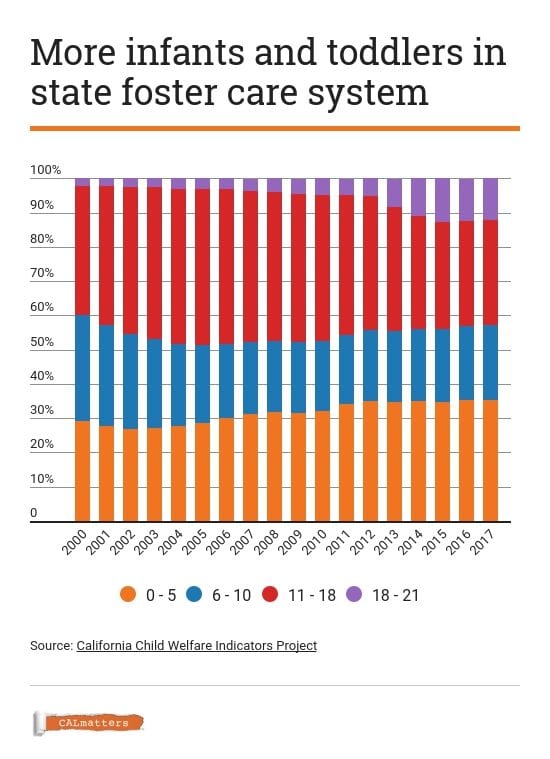 Woods’ story illustrates an important gap in California’s foster system. Persuading a relative, or even a licensed foster parent, to take in an infant or toddler on a day’s notice is tough in the best of circumstances. Without enough additional money for daycare or preschool, it can be impossible.

Now, lawmakers are considering emergency funding to bridge the financial gap in such situations.

Proposed by Assemblyman Tony Thurmond, a Democrat from Richmond, the short-term assistance program would offer immediate vouchers that families could use for child care or preschool when they receive a new foster placement. The vouchers could be used for up to six months to give parents time to apply for other subsidies or reorganize their work schedules.

The program would also require counties to provide these families with help in navigating the child welfare system. Additionally, Thurmond’s proposal would mandate that child care providers be trained to recognize and respond to signs of physical, psychological and emotional trauma.

“Kids need to be supported by nurturing families, whether that’s their relative caregiver or foster parent,” says Thurmond. “This is an important resource in helping them make that match and that connection happen.”

His plan would provide $31 million a year for such purposes, contingent on funding in the new budget, which must be passed by June 15.

So far, not a single lawmaker has voted against the bill, which passed the Assembly and is now in the Senate. A similar proposal failed last year, a casualty of other priorities.

The bridge funding would be a long-sought victory for foster parents like Woods and like Lori King, who lives with her husband and 3-and-a-half-year-old foster son in West Sacramento. King and her husband had to wait a month to receive the child care subsidies they applied for after their foster son was placed with them. That meant paying $1,050 out of pocket for daycare in the meantime.

“You get a call at two o’clock in the morning,” King says. “Some poor 2-year-old has just been removed from abuse and neglect.” Thurmond’s bridge funding “allows the foster parent to, with ease, say yes.”

Wendy Lewis, who lives nearby in Woodland, said such assistance is not just about money but also about the right kind of care. Lewis’ 3-year-old foster daughter has cerebral palsy. When Lewis goes to work as an administrative assistant every morning in the Davis school district, she says, she’s lucky to have a spot at the Yolo Crisis Nursery, where workers are already trained in trauma issues.

If her daughter has a seizure or other problem, the caregivers are “right there,” Lewis says. “They see it, they’re texting me…I would not feel comfortable just dropping her off at a big corporate place.”

Cheri Schroeder directs the Foster and Kinship Care Education program in Woodland, recruiting and providing classes for foster parents and relatives who are caregivers. “When we first started surveying caregivers 11 years ago and asked them what can we do to better support foster parents, child care came right up to the top of the list,” Schroeder says.

This has contributed to what is widely seen as a statewide shortage of foster families.

According to the state Department of Social Services, every foster child in California is placed in some type of care. Of the nearly 61,000 children in the system, more than 70 percent have gone to individual homes. But there are still thousands in institutional group facilities.

That fact, says Frank Mecca, who heads the County Welfare Directors Association of California, along with infants being placed far away from family or siblings being split up, suggests that there are not enough foster families out there.

Such stories are “very common,” he says.

Beyond the financial issue, a shortage of willing families may also be an unintended consequence of success. Over the past few years, California’s foster system has undergone a series of dramatic changes intended to place foster youths permanently with relatives and other families, rather than in group homes. The state now also allows youths to stay in the foster system until they turn 21. The system is more humane this way, says Mecca, but also more strained.

In some ways, the strain is “a function of good news, because for the past decade we’ve been doing a better job of getting kids adopted,” he says. “But it’s also the product of low reimbursement rates and inadequate supports.”

Meanwhile, parents do the best they can, if and when they can, some with more success than others.

“I have a village—a community that helps me and a job that supports me,” says Woods, a six-time foster mom. “But not every foster parent does.”

She has paid thousands of dollars out of pocket for nannies and daycare and called upon friends, family members and co-workers for help. As an educator, she has also made use of her knowledge of the child welfare system. Though she was unable to take in her foster son’s brother when he was born, she arranged for his temporary placement with a nearby couple in her social circle.

Six months later, with more resources at her disposal, including state subsidies she applied for, Woods was able to have him transferred to her home. She is now planning to adopt both brothers.

Ben Christopher is a contributing writer at CALmatters.org, a nonprofit news venture covering state policy and politics in California.