The body of a man found Tuesday night near the Via Princessa on-ramp has been identified as a Sylmar man who was apparently crushed under a pickup truck as he tried to repair it.

The deceased man was identified as Gerardo Silva, of Sylmar.

A call was received by 911 operators at 9:48 p.m. to report a collision at the Via Princessa on-ramp to southbound State Route 14, according to CHP Officer Tony Polizzi of the Los Angeles Traffic Management Center. 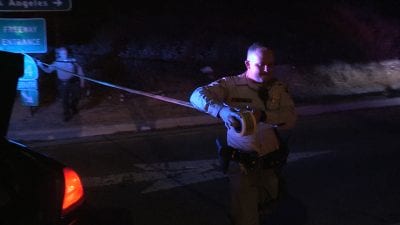 Shortly after 9:45 p.m. Tuesday, Silva was stopped on the Via Princessa Way on-ramp to southbound lanes of Highway 14 in Canyon Country, on the right shoulder, Officer Josh Greengard of the California Highway Patrol wrote in a news release issued Wednesday morning.

“He was under his vehicle performing a repair when, for unknown reasons, the vehicle rolled backward,” he wrote.

“The vehicle’s right front tire came to rest on Silva who sustained fatal injuries as a result,” Greengard wrote.

“The call was for a traffic collision with person trapped,” she said.

Paramedics arriving at the scene reported a man trapped under a Ford F150 pickup truck.

Firefighters freed the man from under the truck shortly before 10 p.m., Lozano said.

The deceased man’s family was notified of the death at the scene, Greengard said.

Responding units from the Santa Clarita Valley Sheriff’s Station sealed off the area to motorists after discovering a body along the north side of the incline.

A SIGAlert was issued for the ramp at 10 p.m., Polizzi said.