A Tuesday night shootout in Newhall highlighted the dangers faced by law enforcement officers every day, which are examined from a number of angles in a recently released book, “Blue Lives Matter: In the Line of Duty,” co-authored by former Los Angeles County District Attorney Steve Cooley.

The Santa Clarita deputy in Tuesday’s shooting, whose identity has not been revealed by the Sheriff’s Department, survived the shooting with a minor wound to his neck, while the suspect is still undergoing treatment for multiple gunshot wounds.

However, Cooley’s book, which he co-authored with another former L.A. County prosecutor, Bob Schirn, looks at nine tragic stories for law enforcement officers who didn’t make it home to their families. 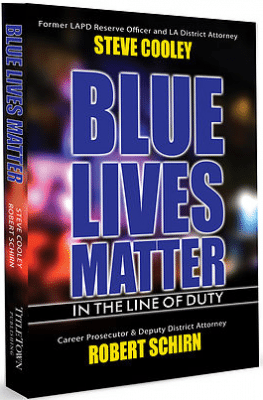 “We wanted to tell the story (of these officers) in a non-fictional way,” Cooley said in an interview Wednesday. “We don’t need to embellish these stories — they’re dramatic enough.”

The book includes a detailed look at the confrontation that led to the fatal shooting of Deputy David March, who lived in the Santa Clarita Valley, but was killed by a wanted suspect who shot March twice during a morning traffic stop April 29, 2002. March was killed in Irwindale on duty, but already had a transfer planned for him to serve at the Santa Clarita Valley Sheriff’s Station at the time of his death, according to station officials.

The case took years to bring to trial because the suspect fled to Mexico within hours of the murder, Cooley said, and his office had to argue in front of the Mexican Supreme Court to bring the suspect back to the United States for prosecution. The murderer was ultimately sentenced to life in prison without the possibility of parole.

By looking at these officers’ ultimate sacrifices, as well as the impact the deaths had on the families and what was learned from the tragedies, Cooley is hoping to offer a look that not only shares insight on the communities’ losses, but also what law enforcement agencies have learned from the murders.

The book looks at nine deaths, including a canine law enforcement officer that was shot and killed while trying to protect his partner. Cooley said he’s already started research on a second book, and there might even be a third.

“Hopefully, current officers can digest that portion of it,” said Cooley, “and maybe use better tactics, be a little more cautious and be more alert — and we think that’s a very valuable contribution to the book.”

The chapter about March, for example, looks at the dangers involved in one-person patrol vehicles, in addition to some of the other factors that went into the case, and how they shaped prosecution, as well.

Cooley also mentioned how, over the years, he developed a relationship with the March family, which had worked with his office to bring March’s killer to trial.

“Well, it was bittersweet, but at least they knew that justice had been done,” Cooley said, describing the family’s reaction to the news that their son’s killer was being successfully extradited after a four-year struggle. “And they played a major role of documenting the injustice of a guy fleeing to Mexico after killing their son, who was a deputy sheriff.”

More information about the book is available on its website, BlueLivesMatterbook.com.