In the aftermath of the 1994 Northridge earthquake, a Saugus neighborhood came together.

So starts the tale of camaraderie, community and cheer that literally lights up a Santa Clarita neighborhood every night for most of December.

The Barkers and the Tippys found mutual enjoyment in a “labor of love” more than two decades ago, their work together on lawn ornaments, in the form of Santa and his reindeer for the Tippys, and snowmen for the Barkers, which are still apart of the Wakefield Court tradition to this day.

(Click here to enter your submissions for The Signal’s Holiday Lights Tour.)

It was a way they came together in the aftermath of the natural disaster that isolated the Santa Clarita Valley for months and left many looking among their neighbors for how to rebuild.

Nowadays, the neighbors shy away from outreach or making an effort to get the word out about what they do, as the event needs little promotion to draw a line that regularly reaches around the block, with visitors constantly parading through, along with small families on foot, to see the Christmas-time spectacle of lights.

“It’s a group  effort — that whole weekend after Thanksgiving,” said Pat Carrigan, referring to the hundreds of thousands of lights that transform a part of Saugus into what you’d also might imagine a fictional North Pole suburb would look like around the holidays.

“Well, all the street thematic stuff, all the storyboards, the (giving street lights the appearance of giant) candy canes, the lights across the street, we do that that weekend and then after that each person just focuses on their home,” he added.

As visitors stroll through the neighborhood, they’re greeted by lawn signs that either share words from “The 12 days of Christmas,” or a passage from the classic yuletide poem, “‘Twas the Night Before Christmas.”

For Shaun Denes, who was outside watching “Sunday Night Football” projected on his garage door with family, while hundreds strolled through his front yard Sunday evening, the best part is the community feeling that working on the lights builds among the neighborhood. He estimated that his home alone, one of more than 40 on the street, has about 40,000 lights.

But incredibly, the displays also seem secondary for everyone on the street. The effort is about the fellowship.

“I think one of the best part of the street is… I mean, I don’t know many streets around where I know my neighbors, from this end,” he said, referring to one half of the cul-de-sac, “to the other end of the street,” he said, pointing a past a sea of lights, cars and pedestrians enjoying their efforts.

Denes joked that he was initially hit with a wave of anxiety when his realtor let him know the house his family had fallen for was of “the Wakefield Court,” which he knew of before he moved to the neighborhood about four years ago. 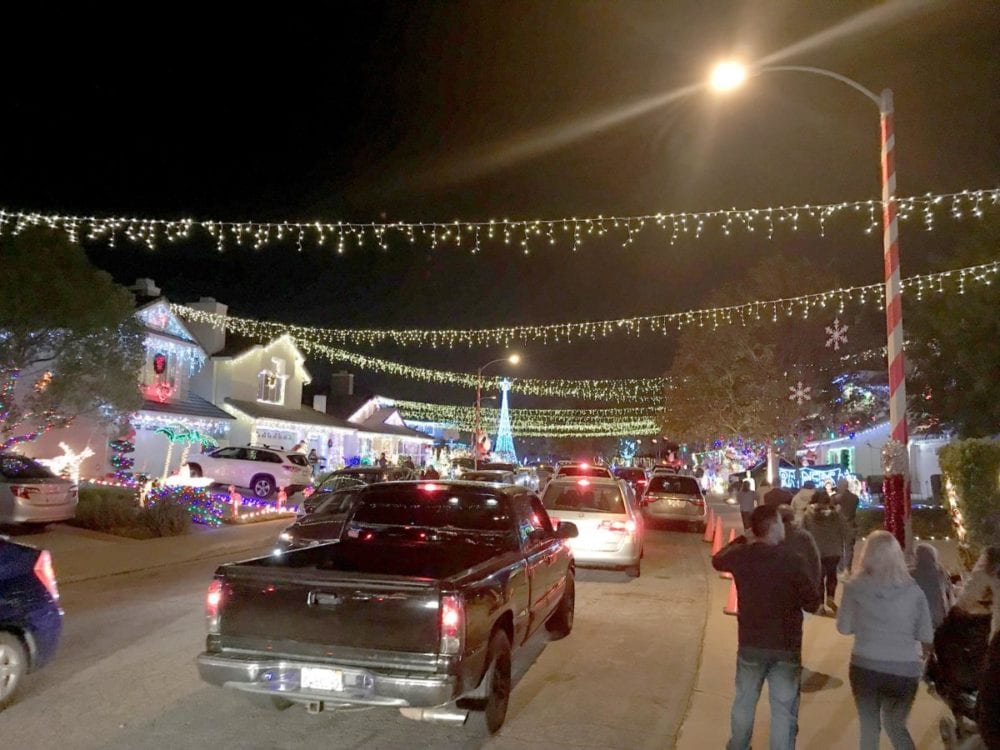 “I don’t know if I’m ready for a house like that on this street,” he recalled, but quickly embraced it, this year proudly displaying support for the Anaheim Ducks, and the “Minions.”

“I wouldn’t even say it’s strongly implied,” he said, of neighbors’ involvement, “it’s just one of those things where, ‘You know what I mean?’” he asked rhetorically and gestured around to countless happy faces creating memories all over his street. “You can’t help not to.”

The event also encourages visitors to leave donations and gifts that are given to the Santa Clarita Valley’ homeless shelter in support of the nonprofit agency.

While some might be put off by the crowd, as not every house in the neighborhood is lit up, others, like Ray Arroyo, couldn’t believe their good fortune when they first realized the holiday cheer of Wakefield.

“As soon as I moved in, my neighbor (Paul) across the street, he said, ‘Do you realize what you moved into?’ And I said, ‘No,’” recalled Arroyo. “And he said, ‘We do christmas lights here, and it gets pretty hectic.’”

That might be one of the larger understatements, given the magnitude of the display, but Arroyo couldn’t have been more OK with it.

“When I was a little kid, I said I wish one day I could go out and decorate (Christmas lights), and where did I land — on Wakefield Court,” he said.

Having lived in the winterland now for a dozen years or so, Arroyo, whose Raiders fanhood also is prominently on display, is sometimes one of the last ones to finish his lawn — but only because he spends the first weekend as the person who gives the street lights the appearance of candy canes, strings lights across the street and hangs snowflakes from them, helps a few neighbors “who aren’t to keen on heights” with their second-story decor and of course, uses a special harness to light a 50-foot tall palm tree in his yard.

“All the smiles that come through here, that’s my payment,” Arroyo said, “we’re talking to family here and (visitors are) just walking and they’re asking questions and we try to tell everyone, it’s a very happy place here.”

‘Wakefield’s Winter Wonderland’ is located off Copperhill Drive and Courtland Way in Saugus. If you or anyone you know in the Santa Clarita Valley would also like to be featured in the SignalSCV’s Holiday Home Tour, visit SignalSCV.com/holidaylights.