Santa Clarita officials are seeking interactive feedback from residents later this month on the potential building of an amphitheater, officials said Monday.

Santa Clarita City Council has awarded a $59,640 consulting contract to AEA Consulting back in November to conduct a study to decipher where an amphitheater may fit and how much it might cost.

AEA has had its first of two site visits this past January, and now the city is taking steps to hold a public forum to hear what the residents of Santa Clarita have to say about this venture.

“We would like to invite the public in to have an opportunity to give their input on what they’d like to see happen,” said Phil Lantis, Santa Clarita arts and events manager, “in terms of potential locations and programming for the appitheater.”

Upon arrival of this public forum, the council will open the floor with a summary of the first site visit of AEA Consulting and ask the people to participate in an interactive smart phone polling service, poll everywhere. This will giving the attendees a more fun and interactive way to give feedback on the potential building, Lantis said.

“We encourage everyone to bring their smartphone to participate but we will have devices available for those that do not,” he added.

The Poll Everywhere app is an easily downloadable live interaction polling device that will help the council hear back from all residents in a quick and easy way, according to the app’s website.

The amphitheater is just an idea right now and this public forum will allow the city officials to find out if the public believes it’s a good idea, said Lantis.

Whatever the Arts Commission and the City Council decide on in the future will be based on the market and the community’s needs, he said.

Lantis estimates Santa Clarita’s amphitheater would seat between 2,000 to 3,000 people. He hopes it would host local concerts and serve as stops for musicians on tour.

As funding for an amphitheater is not part of the Santa Clarita 2020 plan, the outdoor venue would not be built until after that time.

This public forum will be the next step in moving forward with those hopes. 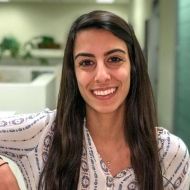