Sand Canyon Country Club, now open for golf, could include hotels and more by 2019.

A year after buying Robinson Ranch Golf Club, tech entrepreneur Steve Kim has renamed it Sand Canyon Country Club and unveiled ambitious plans to build a hotel and resort on the property, on Sand Canyon Rd. one mile south of State Highway 14.

Kim first got involved at Robinson Ranch as part of an investment group that owned 20 percent of the property. In April 2016, he bought the remaining 80 percent.

In recent years, the club was losing $1 million annually, Kim said. Years of drought forced the closing of 18 holes, and then last summer, the Sand Fire hit.

The fire scorched nine holes of the closed Mountain Course and neighboring land in Angeles National Forest. The Robinson Ranch clubhouse and homes on the property were spared.

Allowing the Mountain course to revert to nature, making wider use of desert plants and instituting other water conservation measures have cut water consumption by 70 percent from pre-drought levels, Kim said. 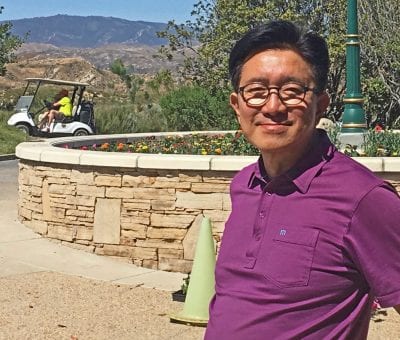 “We had to close anyway after the fire, so it was a good time to redo the course, make it less punishing to golfers, and use less water,” he said.

By 2019, Kim plans to build a resort on the property along the lines of the Ojai Valley Inn & Spa. 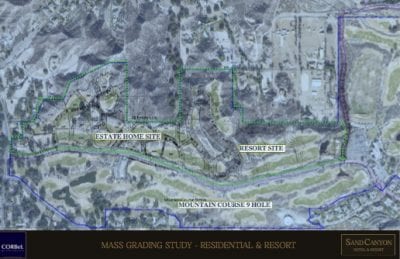 Mass grading study for proposed Sand Canyon Hotel & Resort. Courtesy image.No plans for the project have been submitted to the city yet, according to Jason Crawford, Santa Clarita’s manager of economic development.

Kim said he intends to submit plans to the city within the next month. He declined to speculate on the final price tag for the project.

Kim grew up in Seoul with little money after his father’s publishing business went bankrupt, he said. He came to the United States in 1976 with $2,000 when he was 26, and earned a master’s in electrical engineering at Cal State Los Angeles.

In 1993, Kim started Xylan Corp., which made PizzaSwitch network switches, so dubbed because they resemble a pizza box. French telecom giant Alcatel bought Xylan for $2 billion in 1999.

Since 2007, Kim, now 67, his wife and their three teens have spent the bulk of their time in South Korea. He has focused on philanthropy, including his Dream Hope Future Foundation to encourage young entrepreneurs, to which he donates more than $2.8 million annually.