A man and a toddler were taken to the hospital by ambulance Monday after a pickup truck smashed into a tree in Bridgeport, shearing a water main and sending at least 15,000 gallons of water down the drain.

The single-vehicle crash happened at noon on Bridgeport Lane, near McBean Parkway, where a gray Ford Silverado crashed into a tree. 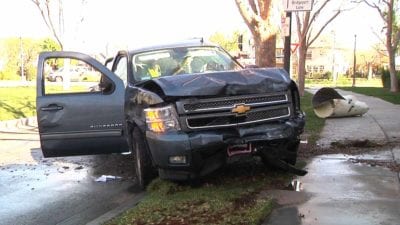 Firefighters arriving at the crash found the truck wedged against the tree on the driver’s side,

“The child (who appeared to be about 2 years old) was out of the vehicle when we arrived,” one firefighter told The Signal.

“The crash was on the driver’s side, so (the driver) was able to climb over the console,” he said. “Deputies (with SCV Sheriff’s Station) got the child out on the passenger side. They pulled the child to safety. The child was uninjured.”

The firefighter said the driver hit a “main feed valve,” which released a gusher of water. 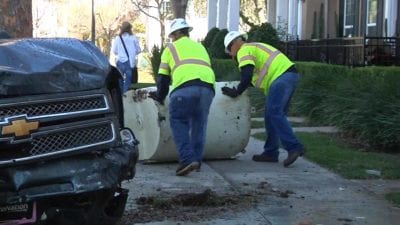 Michael Alvord, director of operations and maintenance for the SCV Water Agency, called the broken water mechanism an “air and vacuum valve.”

“The sheriff’s deputies got the guy out of the vehicle,” Alvord said. “So, from the time it hit the tree to the time we shut the valve off it was a half hour.”

Deputies with the SCV Sheriff’s Station are investigating the crash. 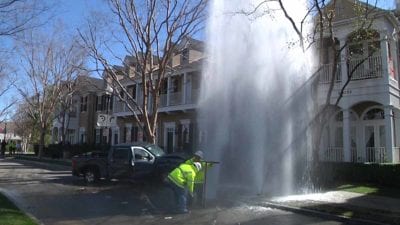