When the students of Rio Norte Junior High School return from their summer vacation next week, they will be greeted by a new mural that celebrates the school’s history and place in the Santa Clarita Valley.

With money remaining from last year’s fundraising opportunities, members of Rio Norte’s Parent Teacher Student Association needed to decide how to spend it. Previous conversations about a mural on campus had piqued the interest of teachers and administrators, so when Assistant Principal David Miles mentioned the idea again this summer, the PTSA agreed it was time to finally proceed with the project.

“We love murals,” Principal Audrey Asplund said. “They bring a sense of pride, school spirit and, if they’re well-done, they can be visually appealing and bring beauty to the campus.”

However, beauty isn’t the only thing the new mural will offer.

Of course, the mural will be painted in the school’s signature navy blue and maroon color scheme, Asplund said. “We love it because it gives us geographical and historical context for our school and our community,” while also allowing the possibility for teachers to develop lessons around it — which is the plan.

During morning announcements, the school will tell stories about Santa Clarita that offer a little history, Asplund said. “One of the things we’ll talk about is the St. Francis Dam disaster.”

The St. Francis Dam and the ensuing flood that resulted from its collapse was responsible for the death of more than 400 people in March 1928. The engineering marvel burst in the middle of the night, spewing billions of gallons of water that carried houses, bodies, mud and debris through multiple communities until the rushing water reached the Pacific Ocean. (More information available at scvhistory.com.)

Some bodies were still being discovered into the 1950s, and the disaster, which ended the career of the engineer William Mulholland, was the second-worst in California history in terms of lives lost, and was surpassed only by the San Francisco earthquake and fire of 1906.

Asplund said she loves that the mural is able to connect the history and geography of Santa Clarita, Valencia and the community.

Events like the dam disaster and people, such as silent film star William S. Hart, are interesting pieces of the valley’s history, Asplund added, which is why she believes the illustrated map is one of the more important aspects of the mural.

On Wednesday, the crew started stenciling the map on the brown stucco surface of the school’s multipurpose building with charcoal.

The project is expected to be completed on Friday, and crews are working 10-hour days trying to finish it, Asplund said. “Only a few have seen the designs, and kids have been seeing pieces of it as they perform summer check-in,” but the finished product is still a surprise.

“I think all of the students and parents are going to enjoy it,” she said.

“We’re really proud of what have going on inside these walls,” Miles said, “and anything we can do to bring attention to that is beneficial to the campus.” 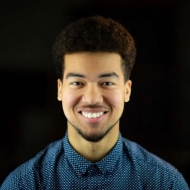