“Am I going to be able to go home?,” the woman, a bit over five feet in height said to the  firefighter with the helmet.

The man, a battalion chief responsible for the safety of Santa Clarita’s east side, told her it would be some time before he had a definitive answer.

Just 30 minutes before Arana asked the battalion chief about the fire, Arana’s two young boys were dozing in their beds. The mother had just finished her shower and was deeply embedded in a movie.

A light flickering between the plastic blinds shielding her home from public eye caught her attention.

Arana recalled going to switch off the outdoor light above her balcony.

After alerting authorities to the fast-moving blaze, a quick thinking county fire dispatcher made Arana aware of the seriousness of the situation and urged her to get her children out of the building.

Within minutes, a barrage of red, white and blue strobe lights flooded the 27000 block of Sumac Court as fire engine company No. 107 thundered in; a sheriff’s patrol car a few seconds behind.

The crew disembarked from the fire engine to investigate and were immediately cast in a red light from all of the emergency vehicles. The firefighters were joined by the raised aerial ladder of Quint No. 104.

Two men in reflective brush jackets climbed the white horizontal steps now raised over the rooftop of the burning building.

The roar of pumps activating in the background gave way to high pressure water shooting into a deep fog of smoke, the source of which was still unknown.

Chainsaws began slicing through tile, guided by firefighters positioned on the building’s roof.

Two sheriff’s deputies working to comfort Arana turned their attention to flames erupting from the rooftop near the firefighters.

Multiple hoselines switched on and battled back the flames which had overtaken the attic. 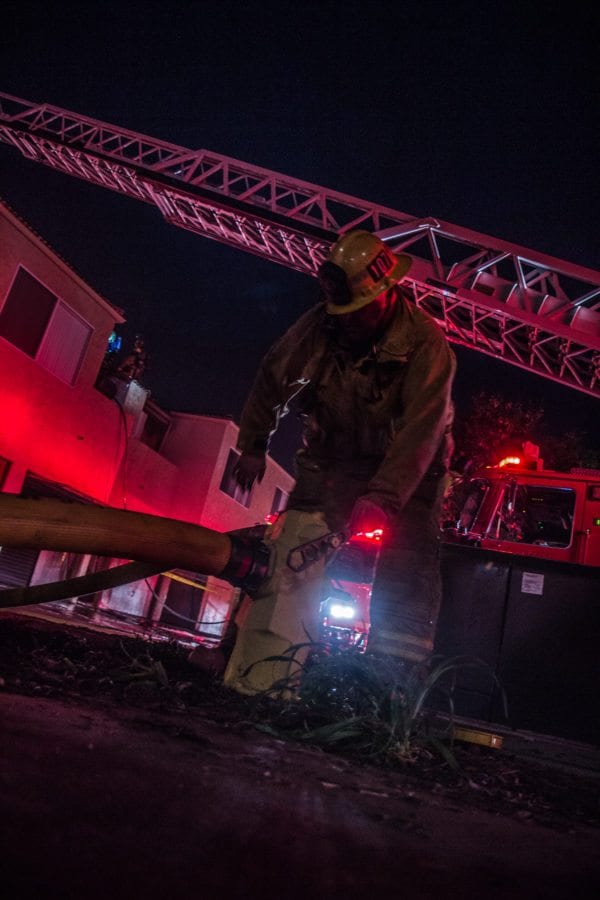 Heavy smoke poured out of the roof’s southeast corner before spreading rapidly to the opposite end.

In short order, five engines, two truck companies, a paramedic unit and the battalion chief – a total of 35 firefighters worked in tandem to duel with the inferno, armed with a plan and cool, crisp water.

Two of the homes, including Arana’s were deemed uninhabitable.

American Red Cross resources were requested for the displaced families.

By mid-afternoon Tuesday, it was learned that the Los Angeles Region of the Red Cross is taking care of two families displaced by the fire.

“Our Disaster Action Team met with clients affected by the fire in the wee hours of the night and were able to provide recovery assistance,” said Melissa Harris, disaster program specialist for the American Red Cross, Los Angeles Region.

But, through the haze of smoke and past the roar of fire engines was a silver lining for Arana.

Her boys were safe and her dog, who normally resides on the balcony, was alive.