All 37 of Shakespeare’s Plays in 97 Minutes? Yes! When Adam Long, Daniel Singer, and Jess Winfield of the Reduced Shakespeare Company decided to attempt to condense his entire body of plays into an abridged 90-minute comedy, they had no idea that their irreverent and witty The Complete Works of William Shakespeare (Abridged) would go on to long runs and worldwide acclaim. With just the right combination of side-splitting hilarity and genuine smarts, three madcap actors in tights weave their wicked way through all of Shakespeare’s comedies, histories, and tragedies in one wild ride that will leave you breathless and helpless with laughter. The Today Show remarked, “If you like Shakespeare, you’ll love this show. If you hate Shakespeare you’ll love this show!” 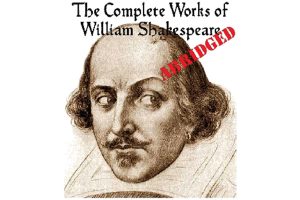 Even if you don’t know the characters, the audience can follow along and appreciate the absurdity of every classic tale due to the comic timing and versatility of the three actors. The show truly must be seen to be believed. This joyful send-up of the plays of the most well-known playwright in the English language is sure to start your new year off with a laugh!

The show follows young Charlie as he struggles to win the contest staged by the mysterious candy manufacturer, Willy Wonka, by finding one of five golden tickets hidden in Wonka scrumptious candy bars. The prize is a tour of the Wonka factory and a lifetime supply of candy for the five winners. But, aha! There’s more to this than meets the eye… and the winning children, some of whom are insufferable brats, must learn to follow Mr. Wonka’s rules in the factory… or suffer the consequences. Roald Dahl’s Willy Wonka will take audiences on a fantasy ride into the land of pure imagination!