It was in our social media world that I actually met Garo Papazian after exchanging Face Book comments and text messages with his ex-wife Phyllis and it turns out that they live right around the corner from my home.  Isn’t it amazing how many Veterans of all stripes that live among us?  It’s noted that the name Papazian means “Son of a Priest”.

Garo was born May 23, 1947, in a “displaced persons camp” in Stuttgart, Germany, which was a concentration camp until the Nazi’s were defeated May 2, 1945.  Garo’s Armenian Christian parents had fled their home country after Turkey’s invasion and were captured by the Nazi’s in 1940 and thrown into a Munich “DP” camp where Garo’s Brother Nick was born.  They were later moved to Stuttgart which was savaged by massive Allied Force bombing missions during 1944-45 leading to the French 5th Armored Division capturing Stuttgart on April 21, 1945.

After WWII ended, Garo’s family was sponsored by family members in 1949 and migrated through Ellis Island to the Bronx in New York where they lived until 1959, when they moved to Montebello, California.  Garo graduated from Montebello High School in June 1965, and then attended East Los Angeles Junior College part time, but was drafted into the U.S. Army July 12, 1966.  After spending the entire day dealing with a physical examination and a plethora of mental written exams, Garo and his fellow apprehensive inductees were finally bussed to Fort Ord, California, late that night.  They arrived at 3:00 AM completely exhausted and disoriented and prime targets for aggressive drill sergeants.  Being a hippie in demeanor and disheveled appearance sporting long hair with an unruly facial adornment, Garo was instantly at a major disadvantage, which his DI exploited with unrelenting harassment until his hair was finally buzzed the next day.

For the next several months, Garo went through Basic and Advanced Infantry Training and afterwards he was assigned to the 4th Infantry Division’s artillery unit at Fort Lewis, Washington.  Age 19, Garo flew to the Oakland Army Base in December 1966, where he was deployed to Cam Ranh Bay, South Vietnam.  On their lengthy flight, most of his fellow troopers were miserably somber and quite frankly, scared to death.  Garo said, “What saved my sanity was having lived in the Bronx and seeing random violence such as a man cutting another’s throat and another man jump off a 7 story building to his death”.

After four days at Cam Ranh Bay, Garo was convoyed to Pleiku Air Base in the Central Highlands where he spent his entire tour of duty assigned to the 64th Transportation Company.  His unit’s primary mission was providing security along the main route to Kon Tum, nicknamed Highway of Horror.  The constant threat of Viet Cong snipers and ambushes kept Garo and his fellow soldiers constantly on edge.  During one mission, one of Garo’s buddies, a new M-60 machine gunner who had just arrived in-country one week earlier, was killed by a sniper’s bullet to his head.  He had mistakenly removed his helmet which served a gruesome reminder to Garo’s unit.  On another convoy, they drove into an ambush; Garo spotted VC snipers in the trees but because they were not in a “free fire zone” they had to wait until fired upon before blasting away.  Garo had just asked his platoon leader, Lt. Wilson for permission to fire, the answer was wait.  Wilson no sooner responded when a VC mortar hit Wilson’s jeep instantly killing him and then all hell broke loose leading to a 3 hour firefight resulting in 4 US KIA’s & 4 WIA’s while the VC suffered 35 KIA’s and 20 VC captured.  In the initial assault, a VC sniper’s bullet hit Garo’s right ear, but his Company Commander failed to request his Purple Heart so he never received one.  Garo feels short changed and is attempting to correct that mistake through Congressman Steve Knight.

After a harrowing tour of duty, Garo returned to the U.S. July 4, 1968, arriving via commercial airliner at Tacoma, Washington, where he and his fellow troops were verbally harassed by anti-war protestors carrying signs and banners.  They were called baby killers among many other disparaging names, which Garo found deeply disheartening given his perilous experiences in Vietnam.  Garo was honorably discharged the very next day and he promptly returned to his parent’s East Los Angeles home.  He was ordered to attend weekly “detox” sessions at West LA’s VA Hospital for four months that were intended to help combat Veterans adjust to civilian life.  Soon, Garo attended a barber school and worked for two barbershops.  In 1971, he moved Fitchburg, Massachusetts, and opened his own barbershop which he sold three years later.  He returned back to Southern California, to start another barbershop in Whittier which went bankrupt due to its bad location.  Garo proved that you cannot keep a good man down as he next became General Manager for Michael’s Shoe Stores while obtaining his Realtors License.  He left Michaels in 1977 to work for Fred Sands Realty for 10 years. For awhile, Garo lived in Beverly Hills.

While at Fred Sands, Garo met a fellow Realtor, his future wife Phyllis Grekin and they began dating.  On a Saturday night date, Garo stopped in at a client’s home just when a traumatic home invasion occurred.  Garo, his client and another person were tied up with duct tape over their hands, feet, eyes, and mouths.  The intruders spent six hours ransacking that home taking every last item of value including Garo’s brand new El Presidente Rolex watch.  Finally, it ended and they freed themselves.  Meanwhile, Phyllis was highly agitated that she was stood up.  They were married in 1980, but chuckling, Garo explained that this incident was the beginning of a long love-hate relationship.  Together, they have two sons and one grandson.  By the way, in those days Garo’s spare time was spent managing four pizza restaurants.

Garo, the consummate entrepreneur, is still busy with real estate and owns three local “Apollo’s Barbershops”, including a VIP Lounge.  Garo is very proud of his family’s heritage and he’s a proud Vietnam Veteran who overcame excessive public negativity towards Veterans while achieving his American Dream. 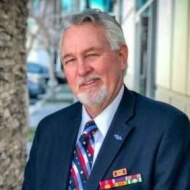