Here’s the latest information on the Lake Fire, an 800-acre blaze sparked in the Castaic Lake area on June 17, 2017.

A small flare up near Castaic Lake prompted a swift response from firefighters with the Angeles National Forest.

Judy said the water-dropping helicopters were able to knock down the flare up quickly after it started.

Firefighting helicopters were instrumental knocking down a flareup on the eastern edge of the #LakeFire this afternoon with ground crews pic.twitter.com/5hNdwcwoiv

There was not an estimate on the number of acres burned in the small fire on the eastern edge of the Lake Fire.

Smoke was visible in the Castaic area as a result of the incident.

As temperatures climbed steadily Monday morning to a forecast 104F, firefighters working in triple digit heat this past weekend have managed to contain 60 percent of the Lake Fire which burned at least 800 acres since Saturday afternoon.

Acreage burned by the fire, initially reported by officials at the Angeles National Forest to be 1,000 acres, has been reassessed to 800 acres.

“On the first day, there was a lot of smoke and we couldn’t see the perimeter,” ANF spokesman Nathan Judy said.

The number of firefighters battling the brush fire near Castaic Lake has been reduced to 380 from 465 deployed initially on Saturday.

The number of structures burned still stands at two outbuildings.

Asked about firefighting efforts carried out in triple digit temps, Judy said: “Our firefighters are used to working in hot temperatures, especially when they’re around the fire.

No smoke has risen and no smoldering has been seen for hours, according to Angeles National Forest spokesman Nathan Judy.

Hand crews are currently working on the east flank of the fire. Clean up efforts are being conducted on the west side of Castaic Lake.

The Lake Fire is 10 percent contained. Officials hope to increase that number later.

The fire is still at 1,000 acres and 10 percent containment as of Sunday morning.

“That containment number will go up as the afternoon goes on,” said Nathan Judy, fire information officer with the Angeles National Forest.

One firefighter suffered a minor laceration injury and was transported to a local hospital where he will be treated and sent back out to the line.

On Sunday, firefighters were working to tackle the east side of the fire. The west side of Upper Castaic Lake is still open for recreational use.

The winds are expected to be calm at four to eight miles per hour.

The heat is a bigger concern for the firefighters than the wind. Firefighters have to make sure they stay hydrated and don’t overheat in this weather.

“That’s why we do a lot of our training before the summer hits, to make sure our firefighters are physically fit,” said Judy.

The fire burned around 1,000 acres before slowing down Saturday evening.

A fire near Castaic Lake has burned 1,000 acres and is 10 percent contained, according to officials with the Angeles National Forest.

The Lake Fire, which was first reported at 1:54 p.m. on Saturday, has destroyed two Castaic Lake recreational outhouses.

Around 2:49 p.m, the the blaze moved from Los Angeles County Fire territory into the Angeles National Forest.

“The majority of it is in Angeles National Forest,” said Richard Licon.

The flames were reported to have burned 1,000 acres around 8 p.m. on Saturday.

“As of last night… it was burning in the area it had held at,” Licon said.

No injuries relating to the blaze have been reported.

According to Licon, the county area that the fire has burned is expected to be contained today, but the Angeles National Forest portion will take longer.

“There are hotspots burning,” Licon said.

As of this morning, Angeles National Forest information officer Nathan Judy reported that, for the most part, the area is smoldering mostly in the interior part of the affected area.

Licon explained that a main concern for the department is the upcoming heat that is expected today.

“It’s warming up already. The fatigue of our firefighters is a big deal because they’re hiking into that steeper terrain,” he said. 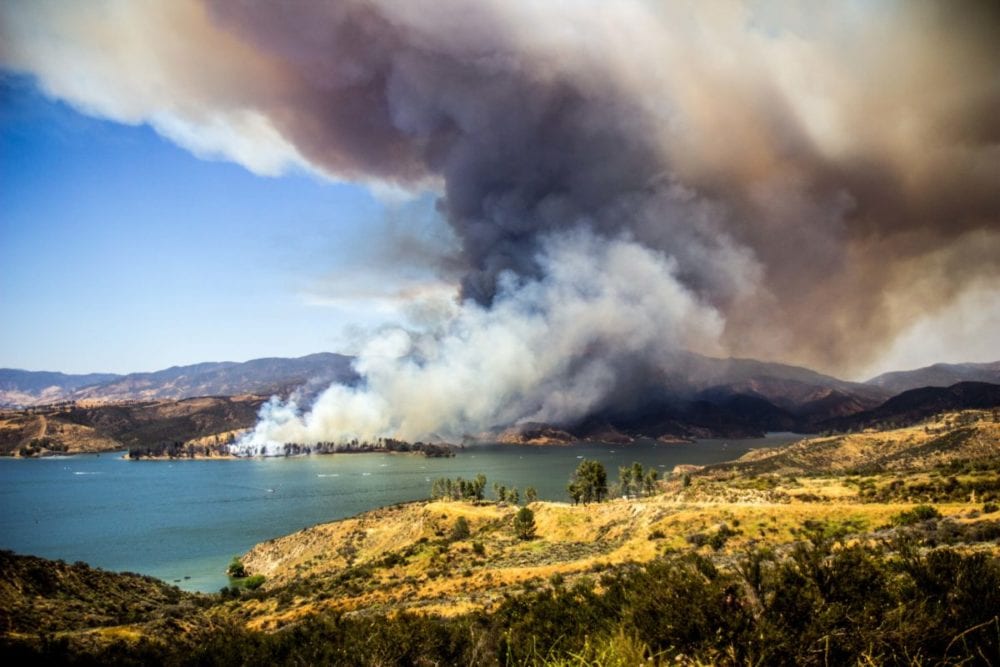 Fire crews were trying to find an access point to tackle the fire.