Close to 1,000 meals were delivered to the Santa Clarita Valley’s senior citizens Thursday, as the Castaic Lions Club once again brought businesses, Hart district students and volunteers from throughout the community together to support seniors.

“Only in America are we blessed on Thanksgiving like this,” said Jim Green, a Santa Clarita resident, as he was about to start in on a plate of vanilla ice cream donated by Magic Mountain at the Senior Center Thanksgiving feast. “God shed his grace on thee,” he added, quoting “America, the Beautiful.”

And just as the effort brought bipartisan sponsorship, the true meaning of the day of thanks did not seem to be lost on the servers, attendees and organizers.

“Where Christmas is about giving, Thanksgiving is about gratitude,” said Flo Lawrence, a Castaic Lions Club member who’s been a part of the Senior Center event for the last eight years through the club, “and we’re grateful to live in Santa Clarita, to live in the greatest country in the world, and the prosperity that we have.”

Hundreds of high school students with the William S. Hart Union High School District joined in the volunteer effort, many of them wearing shirts or uniforms touting their various affiliations from all over the Santa Clarita Valley, whether it was Saugus High’s cheer team or the ROTC students from the program at Golden Valley, to various student government members and more.

Some of the seniors who stopped by took meals to go, others stayed and some received both, but the organizers wanted to make sure everyone not only was fed, but received a positive experience. For example, one of the parting offerings were cupcakes baked by volunteer Susan Lawrence, which offered a treat with a “fortune” or positive affirmation with the frosting. 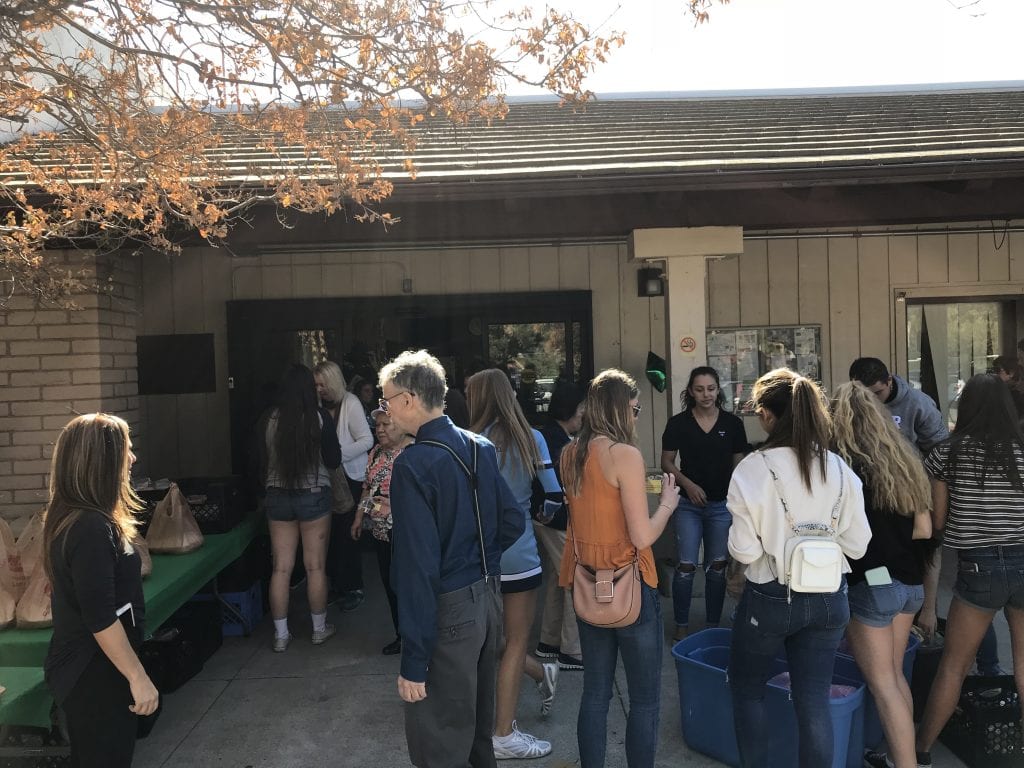 “This is the only holiday where everyone gets together with no strings attached,” said Brian De La Torre, who was enjoying the feast alongside Green. “There’s no religion, there’s no politics, there’s no family animosity, nothing — everyone just gets together and we have a nice holiday.”