For The Master’s University women’s basketball coach Dan Waldeck, extending thoughts and prayers to those affected by the Thomas Fire simply wasn’t enough.

“I know people were praying,” Waldeck said, “but I wanted to see if there was something tangible we could do.”

Waldeck found something to do.

He reached out last week to longtime friend Kirsten Moore – head coach of the Westmont College women’s basketball team – whose squad had been displaced by the fire with the school closed.

Waldeck got the ball rolling on an idea to host Westmont, discussing logistics with TMU’s student life staff, athletics administrators and food services. By last Tuesday, his plan came to fruition, with Westmont occupying an extra set of apartment dorms on campus.

“It’s important for us to not just say you love people, but actively try to help people, too,” Waldeck said. “For the younger kids on their team, going to college may be the first time they’re away from home.

“They didn’t know how their stuff was doing or if they were going to have a school to go back to. We wanted to provide as much normalcy as possible.”

Waldeck had each of his players write a letter to a player on the Westmont team to help establish a relationship before they made it to campus. When Westmont arrived Tuesday night, the teams had dinner together.

“It was nice to be able to be with them and try to comfort them with their circumstances and everything,” said Valencia alum and sophomore captain Sabrina Thompson. “They had no idea where they were going to be next, so we really want to make sure they felt welcomed.”

TMU did more than just open up a row of dorm rooms. It provided meals, hosted Westmont’s game against Montana-Western last Friday and Waldeck even had the group over for dinner at his home.

“It’s not the easiest thing to ask for help when you need it,” Waldeck said. “But they were incredibly gracious and they knew we were there to help in any way possible.”

Westmont reciprocated the favor, creating signs and cheering on TMU as it beat Evangel last Thursday.

“It was so sweet of them to do that for us,” Thompson said. “We didn’t know most of their team before all of this but we connected quickly.”

Westmont returned home last Sunday morning. Players were able to go back to their respective homes with the school on break, and Waldeck didn’t believe Westmont suffered any severe damage itself from the fires.

“I don’t think we did anything extraordinary,” Waldeck said. “If the shoe was on the other foot, I know they’d do the same for us.”

While campus-mates for a week, Westmont and TMU still have two matchups on the docket this year, with a third possibly looming in the Golden State Athletic Conference Tournament. 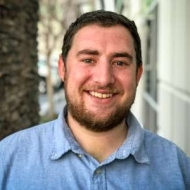