Hart district officials were put on notice by Learning for Life that its partnership with the Sheriff’s Department allowing for the Academy Explorers class at COC is being discontinued as of Wednesday, days before the course was set to start, officials said Friday.

A call placed Friday to the representative for Learning for Life in the Greater Los Angeles area was not immediately returned.

Sheriff’s Department Lt. Ryan Vienna, one of the program’s overseers through the Youth Services Bureau, said Learning for Life was the “chief backer” of the program, which is continuing at two other campuses in Los Angeles County — and finding an amenable solution for all parties is the department’s primary goal moving forward.

“At best, we would be able to have the next academy class up and running there,” Vienna said Friday, in explaining the situation. “Whatever agreement that can be reached that’s amicable by all parties is our intent.”

However, the sudden change in plans still provides an inconvenience for more than two dozen students who planned to begin the academy next week. The academy is offering parents who signed up a refund available Saturday.

“It was a big surprise to us,” said Dave Caldwell, spokesman for the William S. Hart Union High School District. “We found out via email later in the afternoon Wednesday.”

“On February 1, 2018, a decision was made by the Sheriff’s Department to suspend the LASD North Explorer Academy. The Department believes this will be a temporary closure, and plans on rectifying any external third party issues before the start of Class 101 in the fall. We sincerely apologize for any inconvenience this places on your young adults.”

Sheriff’s Department officials Friday characterized the concern from Learning for Life, which was unavailable for comment, as having to do with outcomes for the program. 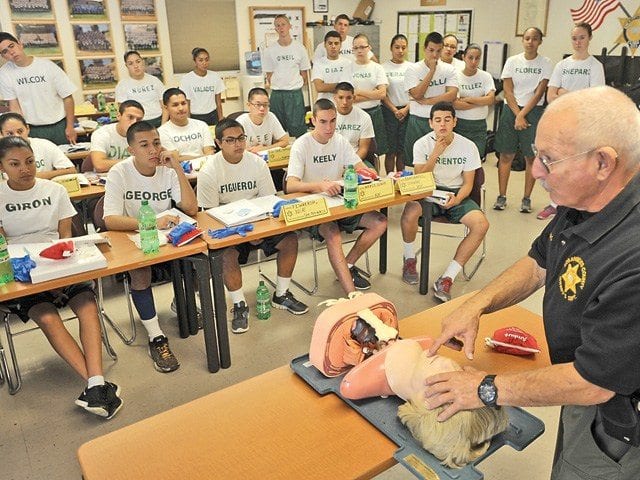 The Explorers program, which is the program and partnership through which LASD is able to offer its Junior Explorers, ultimately aims to place boys and girls who complete that program with a law enforcement academy.

However, unique to the Santa Clarita Valley is a memorandum of understanding, or MOU, that allows the Hart district’s Career Pathways students (who are part of what was formerly known as the Regional  Occupation Program) to enroll in the program, also.

While the MOU expands access to the Explorers program, Learning for Life officials have indicated to the Sheriff’s Department that the district’s curriculum goals don’t exactly line up with the program’s intention, which is to prepare students for future work with a law enforcement agency. That notification was given this week, according to officials.

Learning for Life used this trend as its reasoning for ending its insuring of the program, which meant things had to be halted immediately.

Sheriff’s Department officials noted the Antelope Valley version of the program doesn’t operate through an MOU with a school district, and would continue as scheduled. The Santa Clarita Valley program at College of the Canyons was the only one affected by the decision.

“All current North Explorer Academy Recruits, along with their parents, are requested to come to the Academy this Saturday, February 3, at 2 p.m. to receive their class fee refund check,” according to a Facebook post regarding the cancellation.