I live in Canyon Country in an older home, and I have a handyman who does a lot of work for me.

I’m not really sure that he’s well versed in electrical though he says he is. I’ve read enough of your articles and I’m a bit concerned about having him work on this project.

I have a circuit that trips, I have to go to the panel every few days and have to reset this. My handyman tells me that I should just put a bigger breaker in place of the one that is there and that it would stop this problem. The breaker in place says “15” on it and he’s telling me that we should install a “20.”

Is this correct information and should I entrust a handyman with this work?

Please help, I want to make the right decision.

The wiring that is with this breaker, is rated to the size of the breaker.

This means that the breaker trips before the wire burns, so they are compatible with one another and when installed accordingly, it is a safer situation. If you put a higher rated breaker onto this wiring, you are essentially telling the breaker to allow the current to flow into these wires, potentially causing a fire.

There are a couple of reasons that the breaker trips, one being that it could simply be a bad breaker in need of replacing. The other would be that there is a deeper issue, with the wiring or the outlets that are on this circuit.

This situation is one where you absolutely need to call a licensed and insured electrical contractor, so that the correct investigation into the issue happens, and that the proper repairs are made in a safe manner. Electrical is nothing to cut corners on, as the result of faulty work or lack of work at all, can and usually does, result in fires.

My highest recommendation is for you to hire a licensed and insured electrician, though this will cost you more than the handyman rates. It is worth it in the end though, as your safety is invaluable.

Breakers usually last about 10 years so it is likely just a bad breaker, but you’ll want to be sure and get accurate information from the right source.

I saw your article on this and have a question. I just sold a house and they have this planter on rear side of house and using the stucco wall as the fourth wall of planter. My clients lifted the carpet in the two bedrooms that share the same wall and noticed damp cement at edge of bedrooms. Do you have any recommendations, is this really bad?

You have to find the source of the leak on the exterior and stop that.

If the leak has occurred for a while you may want to open the interior wall and make sure that there is no mold in the wall. The reason for that aside from the obvious, is that in the future if there is another leak and the issue at hand has not been corrected and cleared and documented, they could come back after the previous owner and or you as the realtor, as I’m sure you know. As far as the moisture, set a high speed dryer on the floor for 72 hours. Moisture meter the floor, and if it’s dry, then you’ll be fine.

I believe the sprinklers were hitting wall. I don’t think there is a leak, and why could they come after me, the realtor?

I do expert witness work for the courts/ law firms.

A few times over the years, I have seen realtors named for not addressing issues with new owners if they know a condition exists.

Just be prudent and document everything, and be upfront with the sellers about notifying them that there was an issue. 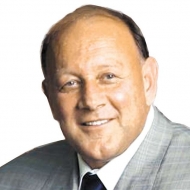