Like many students her age, she’s gearing up to juggle multiple classes, start tennis practice once again and sign up for college preparatory exams.

But, perhaps unlike other teens, Kua prepares hundreds of ounces of slime every Thursday.

If you didn’t already connect the dots, Kua is a social media slime sensation, making thousands of dollars in homemade slime. She’s best known online as SlimeYoda, accompanied by an avatar of a young girl, resembling Kua, holding a container of slime.

At nearly 700,000 followers on Instagram and over 1,700 five-star reviews on Etsy, the young entrepreneur found a business behind mixing a couple of household items.

“It really started when I got really into slime videos online,” said Kua. “I stayed up super late at night watching these videos people posted on YouTube and Instagram. Then I started posting my own and found out I could sell them, too.” 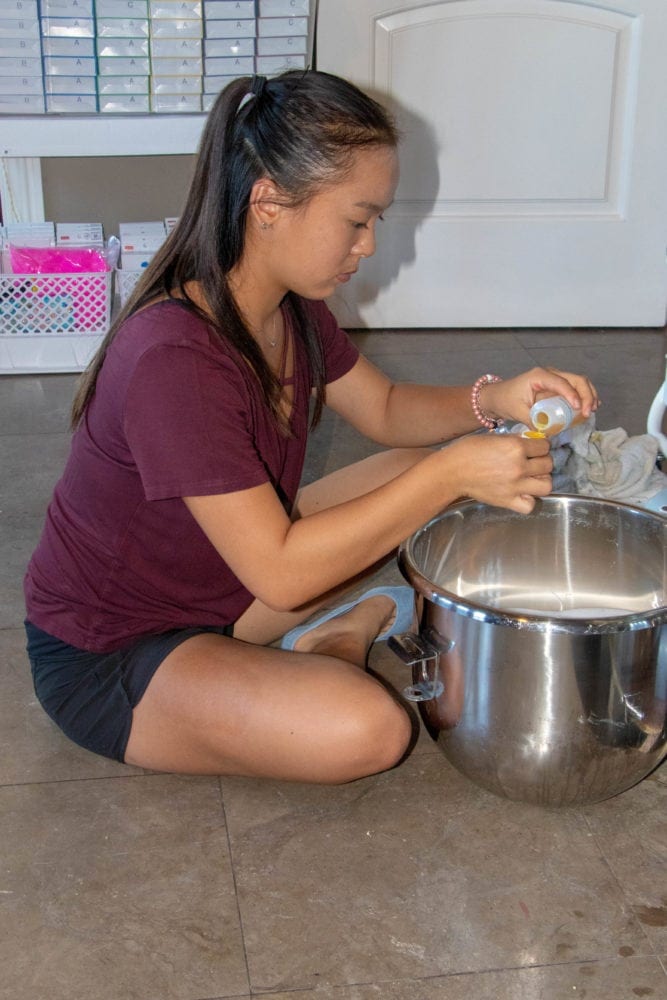 Kua started her business about a year ago, but the slime trend traces back to a couple of years ago, with more than 5 million posts on Instagram tagged with #slime and YouTubers like Karina Garcia making up to $200,000 a month from slime video sponsorships.

This DIY substance is not the slime reminiscent of Nickelodeon’s liquid green goo. Kua said part of what makes today’s slime so popular is that it comes in various colors, themes and even scents. It’s viscous substance also makes for “oddly satisfying” videos to watch, Kua added, another video form that has taken the internet by storm.

SlimeYoda’s inventory offers more than 10 options including Bazooka Bubblegum, Peel the Banana and Oreo Mocha. The best seller, Cheat Day Shake, smells and looks like a birthday cake, with pink and purple beads. She has sold more than 2,000 nationwide, which come in 8-ounce containers and has restocked the item 12 times. Often, SlimeYoda sells out within minutes of announcing new merchandise posted on Etsy, Kua’s father Dennis said.

Fans and customers have said that SlimeYoda is one of the best slime sellers, not only because of the intricate styles Kua creates but because of the affordable price range of no more than $13 for the 8-ounce slimes.

Kua started making her slime, made of glue, borax and water, on 4-quart and 6-quart mixers. After the demand grew, she switched to two 20-quart mixers, allowing her to prepare 350, 8-ounce containers worth of slime per hour.

With a growing business, her parents, Santa Clarita Valley business owners themselves, have helped with organization and efficiency. The family has developed a system to become more efficient during slime conventions, which Kua has participated in and out of state, and with labeling and packaging.

“When she started, she would use sauce containers from Stone Fire,” her father said. “Now we buy containers and even glue by pallets. At conventions, Ashley made slime menus so that those in line know what to order by the time they reach her for purchase and a meet-and-greet.”

Her mother, Alma Kua, said that while she’s proud of her daughter’s business growth, she reminds Kua that the money is just “icing on the cake. I’m proud that she’s learning many skills and is learning through something that she likes and is making kids smile.”

“An entrepreneur at 15, I think that’s a big accomplishment,” she added.

As SlimeYoda continues to grow, Kua said she is keeping funds in a savings account that will most likely go toward paying for college. She said the experience has influenced her to consider majoring in business.

Visit SlimeYoda on Instagram and on Etsy to find out more.