Naomi Young | ‘Music to My Ears’

“Take my word,” I say to my son, “someday you’re going to thank me.” My 13-year-old son is slouching at the piano with his shoulders bent in, desperately throwing his hands on his lap. He has a pouting look on his face and he’s huffing and puffing.

“No. I don’t think so!” I never will!” He murmured. “Why can’t I quit my piano lessons?” He raises his voice, looking at me with his big eyes welling up with tears. 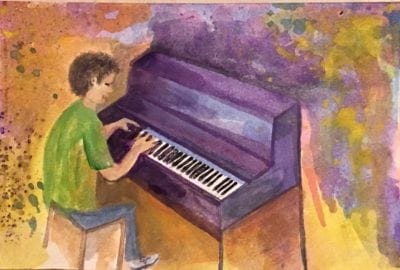 My son Avi and I go through a similar conversation like this one about two to three times a week. Avi started taking piano lessons at the age of 6. After seven years of lessons he wants to do other activities like other young teenagers do and practicing piano is not exactly on the top of his list. He resents it and fights me every time.

“How come you don’t take piano lessons instead of me?” he complains.

“I wish I could,” I say with a sigh, “since I didn’t have a piano as a child, I invest in you! Do you know how lucky you are?” I declare with such conviction and pride as if I just won a relay and I’m passing the torch to him, bringing us the glory of winning.

I smile and say: “Someday when you’re an adult you’ll play such beautiful tunes for a nice girl and you’ll win her heart.”

I continue, “You won’t be passing by a piano without wanting to play it.”

“Sure,” he says, mocking me, always having to say the last word. He starts to place his fingers one by one on the black and white keys, slowly pressing on them, creating one note at a time, slowly but surely increasing the speed. Ten minutes later his body is swaying to the vibrating sounds of his music.

Well, that scene was from many years ago. Yesterday Avi came to visit me. While others in the room were helping themselves to the food, Avi walked straight to the piano and his long fingers were dancing once again on the black and white keys filling the room with his wonderful music.

And if you wonder about the girls, yes, they do surround him while he plays. He seemed to find the right keys to their heart.

I shake my head when I recall those long-ago days. It might have taken a while to prove a point, but perhaps, after all, mother does know best.