A press of a button, flash and the shutter of Brooke Edwards camera did more than capture a photo at the 5th Annual Cancer Survivor Celebration, part of Circle of Hope’s 31 days of Hope at The Warriors Fitness Camp

“When you’re doing work like this, you feel so grateful that you are allowed and given the opportunity to photograph the (cancer) survivors and the people fighting cancer,” said Brooke Edwards, event organizer and owner of Brooke Ritter Photography. “It’s very humbling. It’s incredible what it does.”

Smiles graced the faces of hundreds of people who have been affected by cancer in some way.

“Every room that I go into when I talk about this event, I ask, ‘Raise your hand if you have been affected by cancer in any way or know someone who has?’ There hasn’t been one room I’ve been in where someone didn’t raise their hand,” Edwards said.

Edwards speaks as someone who has lost friends and family to the disease.

“This morning, I had a friend pass away from breast cancer,” she said.

More than a dozen local vendors set up booths to celebrate the survivors and honor the lives lost to cancer.

Portrait packages and raffle tickets were sold, with all the proceeds going back to Circle of Hope.

Brooke Edwards began the annual event 5 years ago after she heard about Circle of Hope’s October fundraisers, 31 days of Hope, in her networking group.

“I was thinking how can I help and be a part of those 31 days. Being a photographer I thought of doing something around that,” Edwards said. “That’s when it started, it was outdoors and really simple. I had volunteers, vendors and raffle prizes.”

Every year the event grows and raises more money for Circle of Hope.

“This is the biggest one yet,” she said. “I’m really excited. It will be even better next year because people keep getting involved.”

A new addition to this year’s event was the tree of love. Edwards stayed up Saturday night to paint a tree on a canvas after she had an idea of how to honor cancer survivors, remember those who lost their lives to cancer and support those still fighting the battle.

“The roots represent us, the community,” she said. “The people who are coming together to do something and just be the tree for those who need the support.”

Butterflies and leaves were cut out for anyone in attendance to write a name of someone who had or still has cancer.

The butterflies were for those who passed away and the leaves were for fighters and survivors, Edwards said.

She took her camera and helped create memories that would last forever. The event was open to everyone in the community, but it had a huge impact on those who are connected to Circle of Hope and cancer.

“I cry a lot, but happy-cry,” Edwards said. She takes portraits of those who attend the event, many of them being survivors.

The event brought light to a disease that affects many residents in the community.

“It’s not about the research or talking about cancer,” Edwards said. “It’s about celebrating life, being together and having fun. I think that’s something some people just need.”

To find out more about Circle of Hope and their services, go to https://circleofhopeinc.org. 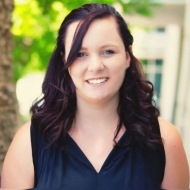