Enjoy an afternoon of great beer, great food and fun with SCV Brewmasters while supporting two charities – Back to the War Zone and Prayer Angels for the Military. The 4th Annual Pirate Festival will be held noon to 5 p.m. on Saturday at Vista Valencia Golf Course. 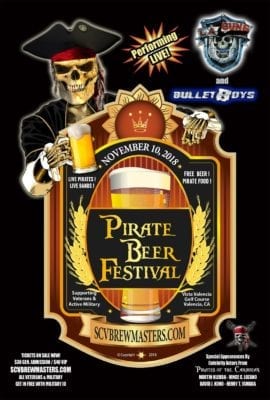 Back to the War Zone provides help to veterans suffering from post-traumatic stress disorder and also provides other needed assistance, such as counseling, mentoring, and job and home placement.

Special guests will include actor Martin Klebba, who portrayed the tough Marty in the “Pirates of the Caribbean” films and Clan Darksail, who will be interacting and performing with the crowd.

Entertainment will be provided by the BulletBoys, a hard rock and rock ’n’ roll band. The group was formed in 1988 “at the peak of the Los Angeles glam metal movement,” according to the group. Unlike the other groups of the day, BulletBoys were “more hard rock and blues fusion than pure hair metal.”

Other groups scheduled to perform include Dirty Deeds, a Bon Scott and AC/DC tribute band; and Barfly, a rock ’n’ roll cover band from Santa Clarita.

No one under the age of 21 will be allowed. Advance tickets are $30 for general admission with free entry to all veterans and military with a military ID and driver’s license.

Admission is $40 at the gate (exact cash only). There is an early-entrance ticket available for $40 and a designated driver admission of $15.