Newhall Family Theatre: A generational effort for generations of students

The 1994 Northridge Earthquake both literally and figuratively changed the landscape of Southern California, particularly Santa Clarita — and especially for the Newhall Family Theatre.

For years, or at least since Meadows Elementary was built in 1975, the small, yet historic theater located on Newhall Elementary School’s campus had been used as a warehouse.

The seats had been removed and the paint was chipping, but the building still stood and a stage remained. Boxes moved in, storage racks were erected, but the original architecture was still the same as it had been in the 1930s and 1940s.

However, following the earthquake that shook the community to its core, a group of parents saw the abandoned building and wished for the theater to be opened once again.

“You could tell it was a beautiful theater,” said Patti Rasmussen, a parent who had helped spearhead the original movement in the early 1990s to reopen the Newhall Family Theatre. “We went to (then-Superintendent Michael McGrath’s office) and said, ‘What do we need to do to get this back for the children?’”

Describing it as “a big sell,” Rasmussen and a handful of parents, including current NSD board President Sue Solomon, who was an NSD parent at the time, formed The Theatre Arts for Children Foundation, going school-to-school, raising money for the restoration project. They held fundraisers, garage sales and country fairs in the park, all to benefit the building’s restoration.

“The whole community came together,” said Rasmussen. “It was an amazing thing.”

And while some of the original amenities of the auditorium were restored, and some classes and programs were able to hold small productions and events in the theater, the Theatre Arts for Children lacked funding to remove much of the hazardous materials and bring the theater up to standard for a prime venue.

In 2011, the Newhall School District’s governing board, with Solomon now a member, proposed a bond measure that would bring funds for facilities within the district and a renovation for the theater. The groundbreaking ceremony for new renovations took place in March 2016, and the theater reopened in spring 2017.

Both Solomon and Rasmussen said when they first stepped in the refurbished theater, nearly three decades after the Theatre Arts for Children Foundation had started, they became emotional.

The theater now seats 529 people and includes a concession area, bathrooms, dressing rooms, an extended stage and a tech booth. And while some features may be new, the renovators made a point to keep the outdoor aesthetic and original proscenium intact.

For the future of the Newhall Family Theatre, Solomon envisions bringing in professional series, speaker series, other community theater groups, cultural programs, partnering more with the Raising the Curtain Foundation — the nonprofit foundation set up last year for the benefit of the theater — to create more education programs for students in the arts.

Solomon said her hope was that within 10 years, partnerships could be fostered between the various colleges, high schools and elementary schools around the district, and make the theater a place where everyone can bring something to the table in terms of learning stagecraft and the art of live theater and performance.

“As long as I’m here in the Newhall community, that’s how we’re going to talk it up,” said Solomon.

The Raising the Curtain Foundation is planning to present “The Man with Bogart’s Face,” in which audience members are going to feel like they’re watching a live radio play.

NSD Superintendent Jeff Pelzel said there’s research that kids who engage with art enhances and supports education, and that the theater has potential to grow in both staff size and use.

Newhall Family Theatre: A generational effort for generations of students “We already have a number of schools using this venue for their end of the year talent show and I want to see more of our schools engaging in those opportunities,” said Pelzel. “The school here itself,  Newhall Elementary, is on a definite track to identify themselves as an art integration school, and I hope to see, as a school of choice, families wanting to be apart of this.” 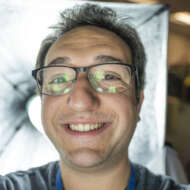