After serving in the Iraq War in 2003, former Navy pilot and now Rep. Mike Garcia said the troops were treated like rock stars and heroes once they came back to America.

Vietnam veterans, on the other hand, did not receive the same acknowledgment when they came back, Garcia said.

Expressions of appreciation and gratitude for the Vietnam War veterans of the Santa Clarita Valley echoed throughout the crisp evening air at Veterans Historical Plaza in Newhall for the 16th annual Military Christmas Tree and Menorah Lighting on Saturday.

This year’s event was dedicated to the veterans who served in the Vietnam War and was organized by Prayer Angels for the Military, a nonprofit military support group located in Newhall.

Along with coffee, hot cocoa and holiday treats, Vietnam veteran lapel pins were presented to each Vietnam veteran in attendance who was “on active duty in the armed forces, regardless of location, during the period of Nov. 1, 1955, to May 15, 1975,” according to the city of Santa Clarita website.

Garcia also recognized former Valencia resident and Vietnam veteran Bill Reynolds, who died earlier this year at the age of 74 and has a plaque dedicated to him displayed at the park.

“We have lost one of the best friends that I’ve had and one of America’s heroes in the last year,” Garcia said. “If you knew [Bill], you loved him.”

Miranda said he told Reynolds his biggest regret during his four years of service in the military was not serving in Vietnam.

“I wish I had gone and been with my brothers,” said Miranda as he spoke to the audience.

Posters and plaques with photos of fallen Vietnam veterans were on display around the park to honor and pay tribute to their service in the military.

Wilk spoke about gold star families, which is a family that has lost an immediate family member in the line of duty of military service.

“No one has given more for our freedom and security than Gold Star families,” said Wilk. “Not only have they lost their loved ones, but I know from personal experience that it haunts them every day.”

After the performances, the ceremony concluded with a prayer from Rabbi Mark Blazer in which he gave words of encouragement for this holiday season.

“After emerging from months of lockdowns, deep gloom and some dark times, we hope that these holidays help us see the light at the end of the tunnel so that each of us can find a way to be a spark of goodness in life and love for those around us,” said Blazer. 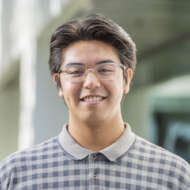