A typical tap dance routine lasts four or five minutes, but a group of local tap dancers at the Gervais School of Performing Arts in Valencia danced and jived for over ten hours on Saturday night.

The school’s first annual Tap-A-Thon featured a group of studio regulars, dubbed the Dapper Tappers, who continuously tapped from 1:30 p.m. Saturday to 12 a.m. Sunday to raise money for UNICEF.

“This is our special event called the Tap-A-Thon,” said Joanne Gervais-Ainsworth, owner and lead teacher at the Gervais School of Performing Arts. “UNICEF has told us that all the money we raise today they will quadruple.”

Dancing for ten-and-a-half hours is a nearly inhuman feat, and no individual performer danced for the entire duration. Rather, the studio took it in shifts – ensuring that at least one member was dancing at each passing moment.

Gervais-Ainsworth hoped that this massive undertaking would garner donations.

Procuring donations such as these is a cornerstone of the Gervais School’s philosophy.

“We don’t compete in dance competitions,” said Gervais-Ainsworth. “We do mostly community service. Our focus is doing service for others.”

The studio hoped to raise over $1,000 by the end of Saturday night.

The studio will donate this money to the United Nations Children’s Fund, or UNICEF, which provides humanitarian relief to mothers and children in developing countries. Gervais-Atkinson cited a benefit concert that her school performed two years ago to raise funds for children affected by the civil war in Syria as a major influence on Saturday’s event.

“We don’t focus our performance efforts on winning awards for our own selves,” she said.

“We focus our performance efforts on raising money and awareness for other people.” 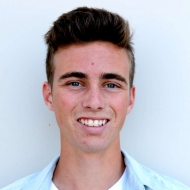