The Curtain Rises on Justin Hayward of The Moody Blues at Canyon Santa Clarita Sept. 9

A half-century and 55 million albums later, 2018 kicked off with the Moodies’ long-overdue induction into the Rock ’n’ Roll Hall of Fame (unfortunately, founding member Ray Thomas checked out just a few months before the ceremony in April).

Later in September and October, The Moody Blues – Hayward, John Lodge (bass-vocals-songs) and Graeme Edge (drums) and their stellar backing group – will spend autumn in Las Vegas, as The Moody Blues play The Wynn. (Catch up with the Moodies at www.moodybluestoday.com.)

Meanwhile, Hayward has been flooring audiences at his intimate solo shows, which he’s done since the first band hiatus, 1975-1979.

Right now he’s on the latest North American leg of his “All the Way” tour, backing his album of the same name.

The career-spanning collection’s 15 tracks include Moody Blues classics from the ’60s to the ’80s like “Nights in White Satin” and “The Story in Your Eyes,” favorites from Hayward’s seven solo albums from 1975-2013 from “Blue Guitar” (1975) to “The Western Sky” (2013), his 1978 worldwide hit “Forever Autumn” (from Jeff Wayne’s “War of the Worlds” musical), and even a brand-new song, “The Winds of Heaven.” (Find out more about “All the Way” at www.justinhayward.com/.)

While the Moodies’ recordings and concerts, with all that glorious production, have struck a familiar chord with so many fans worldwide for so long, it’s a revelation to hear Hayward perform his cinematic, uplifting songs essentially unplugged.

“It’s the most beautiful way of performing these songs,” he said. “It’s closer to the original demos I made all those years ago.”

The experience underscores the timelessness of Hayward’s songs, and the enduring strength of his voice; at 71, he can still nail those high notes with the power and precision of a much younger singer.

“My acoustic solo tours give the perfect balance to the big production of the Moody Blues concerts,” he said. “I’m so lucky to have both.”

Hayward’s not completely solo on this leg of his “All the Way” tour, though.

“I’m with two wonderful players,” he said. “Mike Dawes is a Guitar Player of the Year. Julie Ragins is the most wonderful musician, songwriter and vocalist. She’s been with me a long time.”

“I’m doing songs a lot of people will know from the Moodies and some solo hits,” Hayward said. “I get to do ‘Forever Autumn’ and deeper cuts from the Moodies’ and solo albums, songs I’ve never done on stage before that work really well in this context. Of course, I do more recent things from ‘Spirits of the Western Sky’ (2013) and even newer songs.”

“There’s something for everybody, particularly those who remember the first seven Moodies albums and the stories from the ’70s and ’80s,” he said. “It’s a lovely show, a joy to do.” 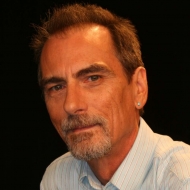