Join the fun with the “10 by 10” variety night in Newhall every first Thursday at The MAIN from 7 to 9 p.m. The ensemble includes 10 acts for 10 minutes with performances ranging from storytelling and comedy to music and magic. Admission is free. 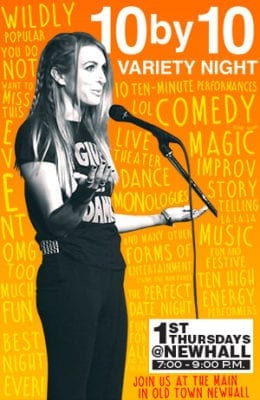 This Thursday, the acts include storytelling by California-born and Alaskan-raised Michael Dougherty. His book “Humorous Stories from ALASKA … and beyond” tells some of his fun Alaska adventures.

Storyteller Vicki Juditz has performed her stories all over the world. She has won Moth StorySLAMs and GrandSLAMS and her story “Boca” aired on NPR’s UnFictional.  No stranger to TV, she has had comic roles on “Everybody Loves Raymond,” “YES, DEAR” and “My Name is Earl,” to name a few.

Longtime Santa Clarita resident Steve Messick brings to the stage a vibrant and entertaining repertoire from around the world. Inspired by a passion for travel, Steve and his accordion will whisk you away on a musical journey through the international sounds of destinations abroad.

Comedian Lang Parker has won California’s Funniest Female Contest. Her credits include “Beverly Hills 90210,” ”The Ellen Degeneres Show,” a pilot for a major network, 40-plus national and international commercials, as well as dozens of movie and television roles.

Musician Tracy Lee Nelson’s original lyrics and blues guitar work comes straight from the heart and has had the honor of being mentioned in Native People Magazine as one of the finest American Blues artists.  Nelson has traveled across the nation with his hard-hitting perspective of the blues.

Ivan Pecel is a nine-time world champion juggler who has appeared on Comedy Central, “America’s Got Talent” and the “Tonight Show with Jay Leno.”

Santa Clarita resident Bart Richards loves to tell stories about many of his interesting, funny and strange experiences. Listening to Babbling Bart may be hazardous to your health.

Glenndalf is a professional magician performing magic in Southern California. He originally moved from Tallahassee, Florida, to enroll in the prestigious School of Manual Dexterity and Prestidigitation Chavez Studio of Magic.

Richard Meyer is a former newspaper editor and a retired teacher. He has authored two books of verse, and has visited thousands of classrooms all over the country sharing his work.

Singer/songwriter John Bergstrom has a music background from his childhood. He writes and performs songs and stories about interesting characters of the Old West.