The Time Ranger | Best birthday of all time — ours

There is an entire passel of punchlines of what to give someone for their 102nd birthday. Creamed corn. Store-bought teeth. Use of their bodily functions. The Mighty Signal turned 102 this week, making us the second-oldest business in the Santa Clarita Valley.

Some robber baron development company — the name escapes me — is No. 1.

As usual, wouldn’t take you anyplace boring. We’ve an interesting trek into the back canyons of Santa Clarita yesterday waiting right through yonder time portal. Innocent as baby condo monkeys to grizzled saddlepals, you know the drill. Hold onto your hats as we ride through the vortex as there is oft a slight breeze.

HAPPY BIRTHDAY TO US — We’re so old, we wear a truss? The Mighty Signal was actually founded on Jan. 1, 1919, by the husband-and-wife team of Ed and Blanche Brown. Wonder what the World War I vet and his wife with the nickname of “Peanuts” (she was a health food nut) would think of the comments section in today’s newspaper?

HONEST ABE WASN’T TOO FOND OF EDDIE — Abraham Lincoln dryly referred to him as, “Master of all he surveys” and refused to name him surveyor general of the United States. Gen. Edward Fitzgerald Beale was a controversial character who amassed a fortune in real estate deals ranging from questionable to crooked, although the brains behind that fortune may have been his wife, Mary Edwards. The SCV’s famed state historic monument, Beale’s Cut, is named after him. Beale was born Feb. 4, 1822, back in Washington, D.C. Had he somehow lived, Eddie would have been 199 today.

HART BUYS A HOUSE — It was early February, maybe late January, 1921. Bill Hart bought the old Horseshoe Ranch from Babcock Smith. A.C. Swall was the real estate agent. Prior to that, the place had been a livery stable for Henry Mayo Newhall. Smith had what was described as a “… large, rambling bungalow of the rustic design, covered with vines and surrounded with beautiful oak trees and nestles up closely to a a low but sharply rising elevation at the rear of the place, this giving way to higher elevations which lend a truly woodsy atmosphere to the surroundings.” Also on the property, where Hart would build his castle, was a giant wooden tower, used as a fire lookout by the forest service.

DOESN’T TAKE AN EINSTEIN TO FIGURE IT OUT — A Signal editorial took physicist Albert Einstein to task. Editor Blanche Brown scolded: “Dr. Einstein is coming to the United States to lecture on his theory of spatial relativity and the curves of so-called straight lines. He might learn something about curved straight lines by watching any competent baseball pitcher.”

WHERE YOU CAN GO TO GET YOUR GOAT — One of the canyons off Soledad was called Cherry Canyon in 1921. It was home to the Cherry Canyon Goatery, a 720-acre farm that bred purebreds. It was about 7 miles due east from the Saugus Cafe. Another service they provided: “Goats dehorned for $2.” Our resident Scotsman, Tom Frew, notes that he’ll do it for a buck.

THE EAGLE HAS (CRASH) LANDED — J.L. Deering rescued a bald eagle up Soledad Canyon. The national bird had caught a rabbit and had become entwined in a barbed wire fence. Deering took the bird home with him and kept it as a recalcitrant pet. We used to have bald eagles flying over Santa Clarita skies until the late 1950s.

POSING vs. SUPPOSING — Silent film superstar William S. Hart was in Chicago, coming back from New York where he had been visiting his book publisher. The eastern media wondered why the man who virtually created the modern movie cowboy dressed like a regular dude. Quoth Hart: “I always wear my western clothes at my ranch at Newhall, but I haven’t the courage to wear them when I’m East. People would think I was posing, though I’d like nothing better than to appear as a cowboy all the time.” Sure know how he feels.

I THINK THAT I SHALL NEVER SEE, A POEM AS LOVELY AS A TREE — The county Forestry Department was giving away free trees. They were used for soil conservation and shade. All you had to do was pick them up, take them home and plant them. Wanna know something crazy? The SCV was covered in trees up until the early 1890s. The forests were cut down for timber and to supply firewood for the bakeries and restaurants of Los Angeles.

SPEAKING OF TREES AND SOIL CONSERVATION — For the third time in a few weeks, the western part of Newhall was severely flooded, especially in the Atwood Addition part of Happy Valley. A big, 10,000-acre brush fire in Towsley and Pico Canyons from last summer helped the flood waters rage. Residents begged county, state and federal governments for some sort of flood control. Their Old Testament woes were just beginning. The early 1940s were the setting for record rainfall and flooding in the Santa Clarita, where rainfall was measured in yards, not inches.

NO SMOKE. NO LIFE. — Paul Kroatch had asked to be released from a veterans’ hospital so he could die in dignity. The invalid rented a room with his little dog at the Sleepy Valley Inn up Mint Canyon and asked neighbors to check on him if they should not see smoke coming from his cabin’s chimney. One morning, there was no smoke and Kroatch had died peacefully in his sleep. He was a veteran of the Spanish-American War. That custom of looking for smoke was an old one, used to check on old-timers living by themselves.

WOULDN’T HURT TO ADOPT THIS CUSTOM IN OUR LOCAL HILLS WITH A FEW THOUSAND TONS TODAY — The Chamber of Commerce started a massive planting program called “Wild Flowers For Weeds.” It was a valley beautification program where the business community yanked weeds and replaced them with wildflower seeds. Wouldn’t hurt to dump a few tons of poppies and other flowers in the hills today.

RUB-A-DUB-DUB, SOME COWFOLKS IN 37 TUBS — Joe Blitz, who was chairman of the Sand Canyon Improvement Association, saw a government notice that the federal government was looking for a place to store 5,000 brand new bathtubs in San Diego. Blitz wrote the feds, saying that he knew of 37 houses in the Sand Canyon area that wouldn’t mind storing them for a long period of time.

HAD THE FIRE DOWN BELOW — Hart High überathlete Wayne Hamaker, 18, signed with the Hollywood Stars baseball squad. The all-leaguer would lead the Far West League that ’51 season in innings pitched (225) and was second with 18 complete games.

AND ALL THE TOW TRUCKS IN CALIFORNIA COULDN’T PULL HIM OUT — A huge landslide at the top of the Newhall Pass pinned a double oil rig against the other side of the mountain. The driver was unhurt. It took some time to reopen the road.

BRRRR. BRRRR. AND A FEW MORE BRRRRS — The Mint Canyon Lions Club stopped having meetings at their old digs. Members complained it was a bit drafty. Said the press release: “Spurred by falling attendance due to near-zero temperatures in The Hangar Room, the club members anticipate a happy home at the new Frontier Cafe.” I’d have to check, but maybe the Lions Club HQ was heated by SoCal Edison’s Crackerjack Random Blackout Division.

PULL OVER! NO. REALLY. PULL OVER!!!! — J.J. O’Brien was off toward an interesting day when he got this call 40 years back. The officer was sent to investigate a report that a woman was sitting in a car a few yards away from J.J.’s CHP headquarters, throwing beer cans out the window and honking the horn. When J.J. arrived, the woman rolled up the windows, locked the doors and peeled rubber. J.J. and other officers hopped in their muscle cars and gave chase. Adding insult to injury, the woman eluded the CHiPsters — IN A CORVAIR — while continuing to throw empty beer cans during the high-speed chase. They finally pulled her over and, this time, while Officer O’Brien was trying to reach in an open window to unlock the door, she rolled the window up on his arm. She did some serious jail time.

EVERY PARENT’S WORST NIGHTMARE — The body of a 10-year-old girl, Kathy Murphy, was found in upper Placerita Canyon. She had been sexually assaulted and murdered. The girl had turned up missing from a friend’s slumber party in North Hollywood. Her stepfather, Gordon Barkley, was charged with the rape and murder a week later. A media circus had surrounded the small Newhall Courthouse on Market to take pictures of the felon — who had just recently been released from prison.

INVASION OF THE HIPPIE CULT — A week after they were run out of Hollywood for creating a public nuisance, Tony and Susan Alamo moved their L.A. operation up Mint Canyon. Locals were surprised when the population of the “hippie cult church” compound doubled. Tony would later be convicted on a slew of charges, ranging from tax evasion to rape to human trafficking. He never got out of prison.

ANNUH ONE YUPPIE, ANNUH TWO YUPPIES, ANNUH THREE  — The census confusion continued. We still didn’t have any accurate population count and census officials couldn’t shed any light on why Saugus wasn’t added to the valley’s figures. Also, folks wanted to know just where was this place called Rancho Santa Clarita the census people came up with.

YOUR JACKASS TV MEDIA, HARD AT WORK — “I have lost an engine” were the last words heard from the small plane. Valencia resident Eric Anderson was one of three people to die in Elsmere Canyon when the lightweight Beechcraft crashed into a mountain during bad weather. Compounding rescue attempts was a veritable airborne circus of media helicopters, circling the wreck. One sheriff’s helicopter pilot, hovering over the wreckage, noted of the confusion: “It’s a dogfight up here!”

BITTEN IN THE WALLET BY THE GAS PYTHON — President Ronald Reagan deregulated gas prices and overnight, prices locally jumped 30 cents a gallon to an unheard-of $1.52 for high test. Gasoline prices had jumped so quickly, most of the local service stations didn’t have modern signs to accommodate the increases. Owners had to physically paint a “1” in front of the cents. The Signal’s Randy Wicks sketched a cartoon on the editorial page of a long gas nozzle and hose encompassing the world like a python. The caption? “Still Hostage.”

THE STING — The CHP set up a speed trap on the western part of Placerita Canyon Road. In a four-hour period, they cited 58 speeders on the winding little rustic road. Today, Placerita is a closed-off private highway. This week 40 years ago, they had 43 major accidents with one fatality — one of the major reasons why the homeowners closed the road off to through traffic.

ONE OF OUR ALL-TIME GREAT FISH STORIES — We had a pretty good rain storm 20 years back. But local Richard Leon had perhaps the ultimate bad weather anecdote. His front yard flooded and he found a 4-pound trout swimming in a newly formed pond.

Phew. We made it back in one, collective piece and didn’t lose a single Time Ranger rider. I think that makes something like 1 gazillion columns in a row. Absolutely has to be a record. Looking forward to seeing all you dear friends and neighbors back here at The Mighty Signal next weekend with another exciting history adventure. Until then, big tip of the O’Farrell and a hearty — vayan con Dios amigos!

Boston is launching his own publishing house, John Boston Books. The first is a three-volume set is “Ghosts, Ghouls, Myths & Monsters — The Most Haunted Town in America.” That’d be us. In the meantime, you can buy Boston’s “Melancholy Samurai,” “Naked Came the Sasquatch” and other of his books at bit.ly/John_Boston. If you liked the book, wouldn’t mind at all if you left a kind 5-star review.

Raigosa named 2022 chair of chamber board 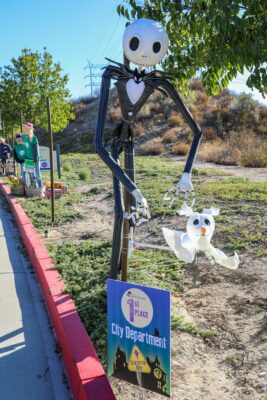