By Jennifer O’Shea | for The Signal

A white veil floats above the crowd as they wait.

Emma Schoppe’s bachelorette party stands in the middle of the crowd. The pale blue, orange and gold lightning bolt is brushed across her face. Each girl in her entourage lifts her Bowie mask up to take sips of their drinks.

They drove all the way to Hermosa Beach from San Diego for this night.

An older Hispanic woman in her flowered blouse and cardigan stands next to a 21-year-old who was dressed as if she grew up in the ’80s. And, at the very front with her arms lifted high, a middle-aged woman in an all-sequin sweater anticipates the arrival.

The lights go out.

The lady’s sequins casts a sparkle across the audience. The guitar sings the first chord of “Rebel Rebel.”

“Oh, I know this song,” says one of the young girls. “I know all these songs.”

They all know David Bowie’s songs.

Eight hours earlier, the venue quietly waited to be filled with life. The band rolls in, unpacks and connects with the sound guy. To most bands, he’s just the sound guy, but the Space Oddity band remembers his name: Matt.

Strums echo from guitars and chords chime from the keyboard. Brooke Lambkin, keyboard player, and Kevin Stevens, drummer, chat over the feedback.

His Bowie tribute band was formed in 2000, and this particular group has been successfully playing together for over 12 years. In the music world, that’s a big deal.

“David’s a good leader; he’s transparent with us. He’s created an element of trust,” said bassist, and former Santa Clarita resident, Trent Stroh. “It’s genuine. We all get along.”

Brighton walks around during sound check, asking with his gentle tone if people have what they need. He eventually brings his costumes and wigs up to the changing room. He thoughtfully brushes the Thin White Duke’s wig. Then turns to groom Ziggy Stardust’s red mane.

A few of the costumes and wigs he currently uses come from the Vittel water commercial Brighton did with David Bowie in 2003. 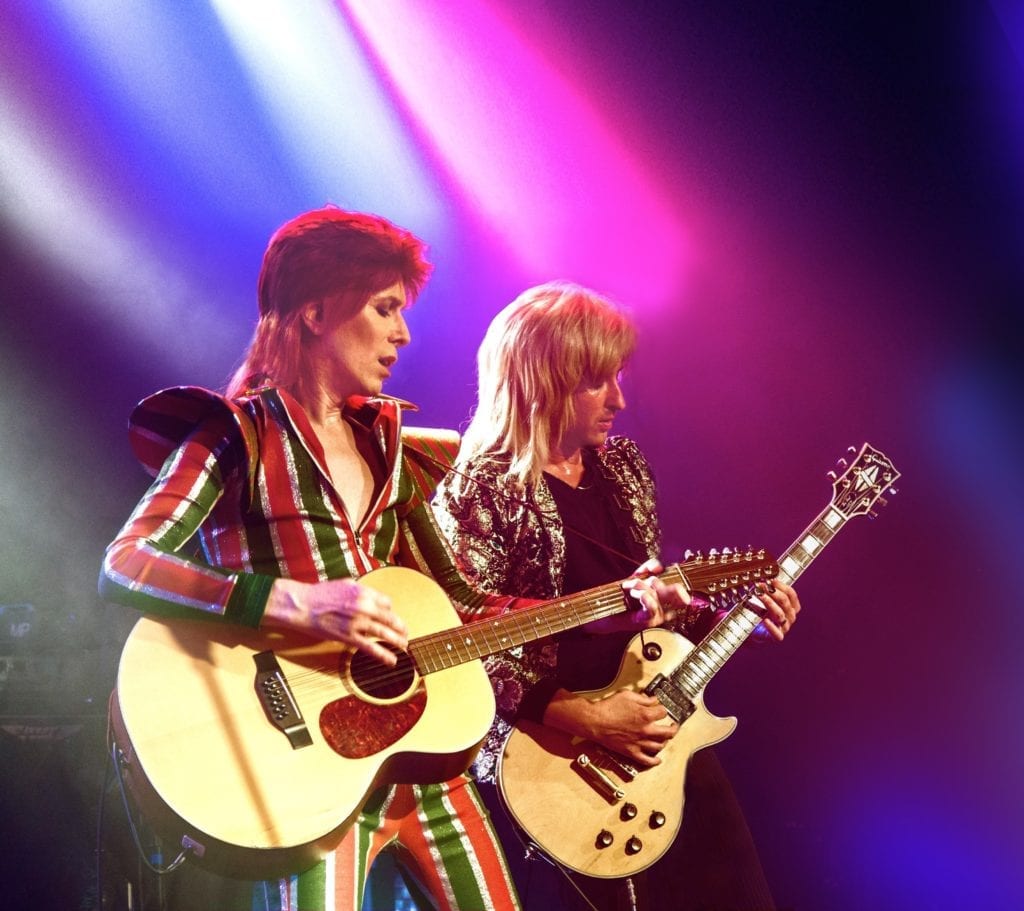 “It was nerve-wracking, humbling, flattering. You really have to deliver the goods when the real guy is there,” Brighton said. “He was very gracious and it all went well. It was enlightening to see up close why someone is a super star.”

Even before he was inspired by the real David Bowie, talented musicians recognized Brighton’s potential. He was asked to be in the band Quiet Riot, and during that time took advantage of wisdom from fellow members.

“Kevin DuBrow mentored me,” said Brighton, referring to Quiet Riot’s lead singer. “He was really cool. It was a very pivotal time.”

After sound check, Brighton calls the band of seven to head upstairs to go over the set list. It’s a two-hour show and he wants to make sure every minute is planned to engage the audience.

“Does everyone have their Sharpies?” Brighton asks before they look at the list. As they think about each song choice and make notes, the small room fills with the fumes of permanent marker.

“Right here, should we do ‘Cracked Actor’ or ‘Queen Bitch?’”

Lambkin remembers they did “Cracked Actor” the last time they played at this venue, and she suggests that this particular crowd would probably enjoy the latter of the two songs.

“We want to engage the audience and take them where I’m going or where the band is going in an emotional or spiritual sense. We’re trying to transcend—go somewhere,” Brighton said. “That’s the power of music to take you to another place, lift you out of mundaneness. And, if we can accomplish that for an evening, I think that’s something.” 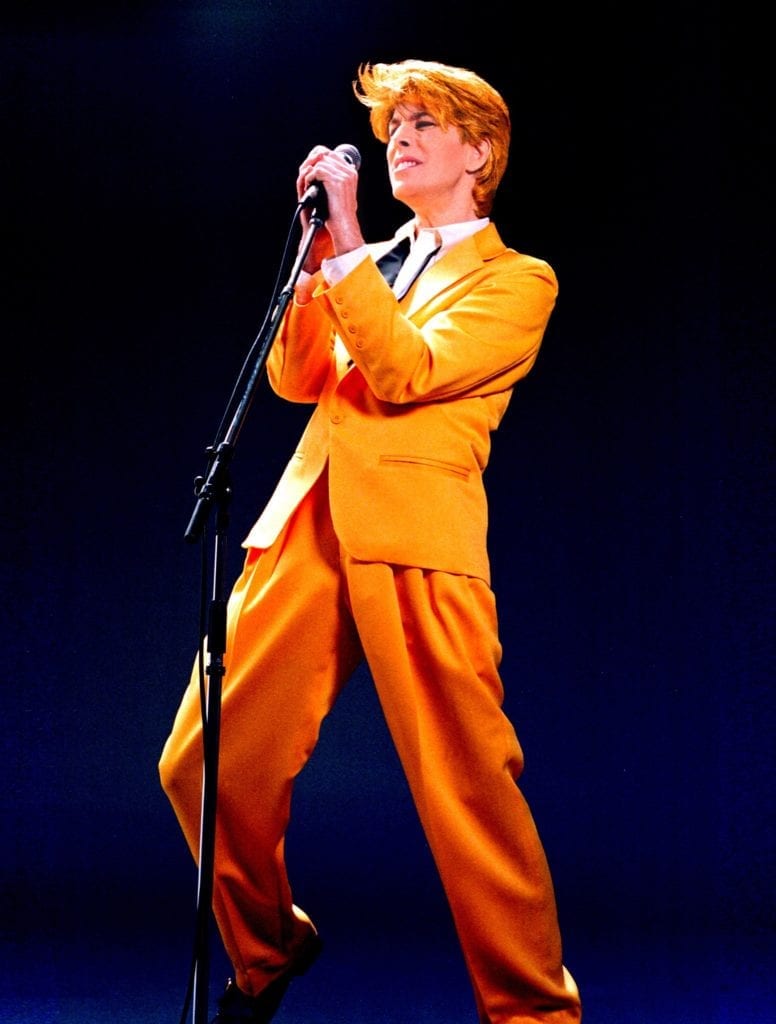 Brighton’s time with Quiet Riot was short, but later he was able to create his own band—Brighton. They signed a record deal and toured Europe. It was what he thought he wanted.

Unfortunately, like so many bands in the competitive industry, it didn’t work out.

He took jobs as a side man, working sporadically playing other people’s music.

Eventually, he got sucked into the tribute world and worked as much as he wanted. For years, he traveled with Beatles tribute bands playing as George Harrison.

“After like five years of doing Beatles, I got tired,” Brighton said.

Jodi Stark from Orange County has been rocking out at as many of those performances as possible since the beginning. Her group of girlfriends reserved a booth at the very front next to the stage.

“We’re picky about who we see at this venue, but we’ll come to see (Brighton) every time he’s here,” she said.

During “Fame,” his eyes connect with someone in the front. He reaches out for her cellphone. They take a selfie. Brighton notices Emma and the bridal party out in the crowd and points out to them with a soft smile as Bowie would.

The crowd connects with every song, eyes fixed on the stage as Nelson and Switch—the moniker given to guitarist Chris Sobkowich—now solo for six and a half minutes of classic rock and ballad-types. As they play, Brighton sneaks from the stage with Lambkin, who usually helps him with the many costume changes of a typical performance.

Brighton holds out the microphone for the audience to finish the chorus of “Changes.”

The tribute band plays crowded bars, symphony halls and casinos. All ages, all abilities, all ethnicities gather in the same space, to fawn over David Bowie, to be immersed in the world of the music he created.

Brighton is particular. A degree of commitment is required to execute this Bowie tribute.

Sobkowich has played in other tribute bands and as a side man in several original projects. At a young age, he made his way from Toronto to Los Angeles, and currently lives in Santa Clarita.

Switch and Brighton met through a fellow musician. Like most first meetings, the two decided to get together at the local Starbucks. Switch looked around and noticed a guy in a big, long green trench coat.

“He doesn’t look like David Bowie,” Switch thought to himself.

The two had a brief conversation, but Brighton was more interested in presenting the Bowie material he had for Switch to study, including music and VHS tapes of performances.

“He’s very specific, wants to be as excellent as possible,” said Switch, who now acts as Mick Ronson, playing a blond 1968 Gibson Les Paul replica. Just as Ronson did in the ’70s, Switch acquired the same version of the Les Paul Custom in black and got help from William Dunavant to bring it to “Ronson Glory.”

Switch was officially welcomed into the band and his preconceptions from the first Starbucks meeting were quickly proven wrong when Brighton came out dressed for a rehearsal.

Switch says he feels that many musicians look down on the tribute scene because original bands work so hard to create their own material. But, the music scene has changed. People aren’t consuming it the same as they used to due to newer outlets such as YouTube, Spotify and Pandora.

“We’re thrown into the abyss of YouTube. When people don’t like what they see in front of them, they look to the past, what they liked,” Switch said. “Music stands the test of time.”

At a tribute show, the audience has the opportunity to have an experience that preceded their own time. Younger generations connect with the older, making new memories and sharing old ones.

Years ago, Brighton’s sister took him to see Bruce Springsteen. “That gentleman knew better than anyone how to make everyone feel like they were friends with everybody there, and part of something together,” Brighton said. “He knew how to inspire them to go out in the world and make it a better place. He’s like an evangelist.”

On cue, the crowd methodically sings out, “We could be heroes…just for one day.”

“That’s the idea. It’s a community. I didn’t understand this when I was young. But, part of what drew me in was there’s a community on stage. They’re playing together,” Brighton said. “Subconsciously, we long for community. That’s what happens at a great show. People are brought together.”