Before so much and so many, there was The Mighty Signal

Before all these inventions, fads, businesses and birth of the vast majority of all the sovereign nations of the world today — there was The Newhall Signal.

A century and four days ago, on Jan. 1, 1919, The Signal was founded by Edward H. Brown and his wife, Blanche. The kids around town called her “Peanuts” behind her back because she was a — before there was even such a word —  vegan. Ed was a World War I veteran, who suffered the lingering effects of gas warfare in the trenches of France. Ed was in ill health from the paper’s launch to his death in 1924. Blanche did much of the hands-on work of putting out the weekly paper. That first issue came out on a Friday — Feb. 7, 1919.

But The Signal wasn’t the first newspaper in the Santa Clarita Valley. Many think that credit goes to The Acton Rooster, which ran its first issue on July 15, 1891. It published on the 15th of the month and subscriptions cost 50 cents a year. “In advance…”

Actually, the valley’s first paper was created by a young bookkeeper for the Coast Oil Co., Billy Carlson, in the early 1880s.

I’d kill to have a copy. Every week, for reportedly two years, Carlson sold 10 copies — personally handwritten, no printing press — on 10 big pieces of paper. Carlson was a better journalist than farmer. He tried raising goats in Newhall and months later wondered why they weren’t being fruitful and multiplying. Turns out Billy bought 50 Billy goats. Later, Carlson would become a millionaire in real estate, only to lose his entire fortune. 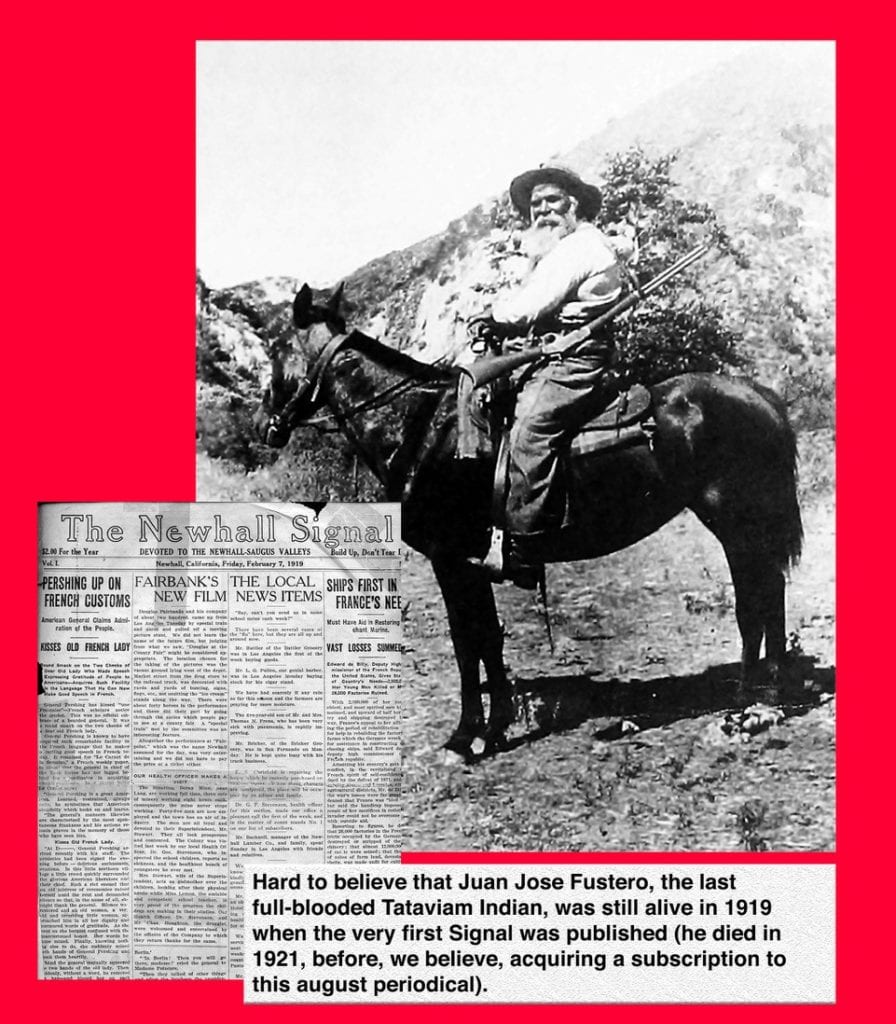 We are communicating creatures. We talk. Blame. Gossip. Embellish. Worship. In a broad sense, journalism may have been around for tens of thousands of years. It can be argued that the cave paintings depicting hunting animals in France and Indonesia, dating back 40,000 or more years, are a form of journalism. They are, at least, an editorial. Even the stencil of a hand on the wall of an underground chamber is an opinion piece stating: “Here I am.”

In 59 B.C., roman emperor Julius Caesar ordered the creation of daily announcements, carved into stone and metal. They were publicly posted.

Inarguably, the most influential person of the last 1,000 years was Johannes Gensfleisch zur Laden zum Gutenberg, inventor of the movable type printing press. With his 1440 prototype, Gutenberg started a technical and ideological revolution, allowing ideas, knowledge and reading itself to be distributed not just to the elites, but to the masses. From the printing press came the newspaper.

In 1556, the government of Venice created the first regular newspaper. It was called Notizie scritte (“Written notices”). It cost a gazetta, a small coin of the day. Yes. Hence the word, “Gazette.”

Newspapers, most of them government-sponsored, spread around Europe. In 1689, “The Present State of the New English Affairs” makes its debut. It’s the first newspaper in America, printed by the state of Massachusetts. The Boston Gazette arrives in 1704 and is the country’s first non-state-operated paper. A century later, there are 1,200 newspapers spread across America.

Depending on your politics, that was not necessarily a good thing.

“This is the Dark Age of Journalism. Few papers are ably edited. They reflect the crassness of American society of the times. Scurrility, assaults, corruption, blatant lies are commonplace. Journalism has grown too fast.” This was an opinion piece by the American Journal, 1790.

Think President Donald Trump gets bashed by the mainstream media? Most papers of Thomas Jefferson’s day predicted that every church in the country would be shut down if he were elected.

Remember the Aaron Burr/Alexander Hamilton duel? (If this helps, they produced a musical about Hamilton…) That duel started as a result of one-upsmanship of editorials and personal diatribes against the political adversaries in both men’s newspapers.

The 1890s arrived and America was awash — and many say it still is — in yellow journalism where newspapers relied on sex, crime, depravity and gossip to sell their pulpy products. They even used their own editorial pages to advance their personal agendas.

At the turn of 20th century, there were four major Los Angeles newspapers: The Times, The Herald, the Mirror and the Examiner. Each ran rabid editorials, along with “journalistic” pieces, on which would be the best location for a new, paved highway north of Castaic called The Ridge Route. Turns out, each of the four papers owned land along the route. The Times eventually won both the war of words and the highway contract.

Even our own Acton Rooster got involved in yellow journalism.

This is from a story in The Rooster from 1900, about how the Chinese used babies in experiments to turn them into monsters: “…to transfer a man into a beast would at first seem impossible. It is accomplished by the Chinese to whom nothing seems to be unknown. The skin is removed in small particles from the surface of the body and replaced with the hides of living animals. Dogs are usually applied. The operation requires a full year to accomplish.”

We’ll take a look next Saturday at The Acton Rooster, the newspaper that predated The Mighty Signal in the Santa Clarita Valley…

John Boston has worked for The Signal off-and-on for nearly 40 years. He has taught the history of the SCV and is the author of the historical book, “Images of America: The Santa Clarita Valley.” Boston writes the Time Ranger history column in Sunday’s Signal.