The five types of co-workers

My wife and I have planned, Lord willing, to run a half-marathon in every state. A couple of days ago, we ran No. 7 on the big island of Hawaii.

I noticed during the race there were essentially five categories of runners, and I could see each of them in the workplace.

The first we met was the statistician.

They can recite all the facts and figures of the races they’d run but there seems no genuine passion for what they’re doing or why they’re doing it.

Sadly, there are too many statisticians in the working world — fixated on performance and want to measure everything but seem to have forgotten their first love — why they started or joined the business initially.

The second type we met was the inconsistent.

These are people who start and stop. Then, after a short while, they start up again strong, and then stop again and walk along. This pattern repeated for 13.1 miles.

We see the inconsistent in the working world. One day, they work hard. One day, they don’t. It all depends on how they feel — how they’re treated and their ever-changing views on their colleagues, customers and management.

The externals largely influence the inconsistent worker. What happens to them dictates their spurts or slowdowns.

The third type we saw on the hills of Hawaii was the selfie. These were the folks who kept stopping to get a picture. Whereas the inconsistent stopped to huff and puff with their head down in a defeatist position, the selfie held their head proud and strong. If their pictures had words, they’d be screaming: “Look at me!”

The selfie can be very poisonous in today’s working world, as they often don’t play well with others. Why? Well, they’re so used to being up front and center they don’t like having others in the picture: Selfies picture themselves in the corner-office and connive about how management decisions affect the three most important people in their lives — me, myself and I.

Three down, and two to go.

The fourth category I observed was the hypo.

I am hearing our clients talk more and more about the hypo — these are “high potentials” the organization believes are destined for greatness.

I always wonder what happens to the hypo in, say, seven to 10 years’ time. Did they reach their potential? Did they fall into mediocrity or take their talents elsewhere? Sadly, we don’t always get to hear the end of the story.

I saw many a hypo in the half-marathon.

I did see some of them fall by the wayside as they went too fast, too quickly.

I’m sure some of them did finish strong — I’m just not sure how many, as I didn’t see them again.

Lastly, there’s what I would call the Energizer Bunny.

They just keep going and going. Their energy and purpose comes from within.

Not to be the hero of my own story, but I like to think of myself in this last category. I’m not the fastest, but I’m a finisher.

Someone once said to me: “Keep running in a straight line until someone tells you to stop.”

My wife and I are running these half-marathons, yes, to keep reasonably fit, but, more importantly, we’re doing them because we love America and want to see the country we now call home.

That’s the purpose that drives us. Yes, two days later I’m finding it difficult to walk, but I have a cool medal, which is nice.

The pain will pass, and the medal doesn’t mean much to me, but the memories will remain.

We see the Energizer Bunny in the workplace, too.

These people work hard each day.

They take time to recharge in the evening, but they’re ready to give 100 percent tomorrow, regardless of what’s happening around them. Their energy is within because an external force has charged them all up.

Gosh, that’s deep — must be the Hawaiian air or my lack of sleep.

So, we say mahalo to the big island — thanks for the memories.

Santa Clarita ranked one of most expensive commutes in nation 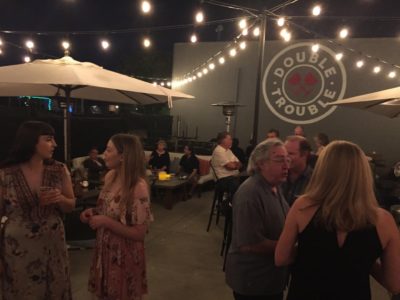