The Time Ranger | The Agony of Being ‘et’ by a Bear

Ah, sweet, blessed autumn. Just about here. All these wonderful years here in Santa Clarita, I’ve come to notice something. Give or take, there’s always about 100 hot days. Wretched heat starts right around the Fourth of July and sizzles until about Oct. 15. Of course, there’s the predictable and out-of-place hot spell in December or January.

I love those days. That’s when it’s 90 and convertible weather and I will, without fail, call my best pal Phil Lanier in Chicago, where it’s 40 below, to ask: “Hey Phil. I was thinking about maybe wearing a long-sleeve shirt, for later tonight when it dips down to 62, especially if I drive to the beach for dinner. Whadya think, Philly? What should I wear?”

Strange. Phil always has the most unkind response.

If my crackerjack math training at Hart High still serves, I calculate that means starting today-ish, we’ve got 265 days of simply perfect weather ahead.

Let’s go climb aboard our fine ponies and ride into what some refer to as oblivion and we call the beauty of an endless yesteryear.

WORSE? THE GUY LOOKED LIKE GABBY HAYES — (For the benefit of our younger demographic saddlepals, Gabby Hayes was an old rock-hard biscuit-eating character actor famous for his Western sidekick roles and grizzled beard.) One of the valley’s most infamous characters, W.W. “Wert” Jenkins, was born back in Circleville, Ohio, on Oct. 12, 1833. And, he ended up looking like, say it with me — “Gabby Hayes.” Wert would homestead in Castaic and be a lead participant in one of the West’s bloodiest range wars. He was also a captain in the California Rangers, the outfit that cleaned up Los Angeles in less than two years. How? By shooting, beating and hanging all the lowlifes. More local angles? Jenkins was hired by L.A.’s mayor, our own owner of the SCV, Ignacio del Valle. Hmm. Maybe old Wert should have stuck around on the job.

SURREY YOU JEST? — On Oct. 12, 1915, the town of Saugus reverted back to its original name of, well, Saugus. For a while, the post office called the place, Surrey. Oddly enough, Surrey was the middle name of silent film star, William S. Hart. No relation though. On Oct. 13, 1876, the town of Newhall was founded near present-day McDonald’s at Bouquet-Valencia-Soledad Junction. Because of a drought and windstorms, the townsfolk would dismantle the entire settlement and move it a couple of miles down the road to around 6th and Main Streets today.

I HAVE THAT SAME EXACT PROBLEM ON MY BICYCLE TODAY — That original Newhall Train Depot (built in present-day Saugus, remember) was constructed around 1880, deconstructed, moved to Newhall and then closed in the 1930s. Story is, some of the bigger freight trains couldn’t stop there because of the grade to the Newhall Tunnel. Seems they needed to back up to Saugus to get up enough speed to make the hill in Newhall.

BEARS REPEATING — Not a great day for Pete LeBeck back on Oct. 17, 1837. He was killed and then — ahem — “et” by a grizzly bear up by Frazier Park. The bear weighed 8,375 pounds. (Just kidding; Wanted to see if we could give everyone on the SCV Historical Society a heart attack.) There has been some debate as to whether the little town of Lebec was named after Peter. Some say it was. Some say it was named after a grocer named “Lebec” and not “LeBeck,” as the mountain man spelled his name before becoming bruin hors d’oeuvres. Bruin Hors D’oeuvres. Good band name.

THAT BLANCHE, SHE’S OUR GIRL — One of the best editorials The Mighty Signal ever produced was by the quiet and bookish editor/publisher Blanche Brown. Wrote the widow: “You can change your tastes. Do it. Linger among the best books. Persist in hearing the best music and looking at the best pictures. High tastes are not for certain ‘elect’ souls. They are for all.” Not to argue with my betters, but isn’t there something sort of Old Testament-ish referring to “lipstick on a pig?”

AND, FOR A QUARTER, TOM FREW WOULD TAKE YOUR GRANDMOTHER DANCING — A.H. Wilkie ran the local Newhall Barber Shop. You could buy tobacco, get your laundry done and even have your itchy scalp problems cured with KDX Dandruff Remover. One could also get a hot bath there, too.

THAT DOLLIE WORE OUT A WHOLE PASSEL OF BUSES — Dollie Olsen started her freshman year in high school. This was long before there was a Canyon High and the lass had to traverse much territory and many mountain ranges to get her education. Her bus ride lasted three hours both ways. Dollie went to Antelope Valley High.

WONDER WHAT SHE’D SAY ABOUT TAKING A TRIP TO DOWNTOWN LOS ANGELES TODAY? — Miss Helen Miller, of Saugus, had just returned from a vacation in Palestine and Jerusalem and gave a lecture at the local Presbyterian Church about her travels. Helen said: “A trip to the Holy Land makes the Bible a reality.”

AMEN BOY HOWDY, IF THESE AREN’T A COUPLE OF COP NAMES — This is one of my FAVORITE lawmen stories and hope you law enforcement saddlepals get a kick out of it. On this date, a rancher called the local sheriff’s office to report some dumb hunter had shot one of his horses dead. Officers Spike Waldrip and Homer Moran went up to investigate, then drove back to town to write up the report. Story goes that Homer kept chewing on his pencil over the spelling of “San Francisquito,” then got up, grabbed his hat and headed for the door. “Where you going?” asked Spike. “Getting in the car and gonna drag that horse over to Mint Canyon,” said Homer.

YUP, THAT’S FARMING — Enos Brantley, of Sand Canyon, paid off the local Friendly Feed Company up there in eggs and fried chicken and, after his first year in business, broke even. Said it was a good year for farming.

AND, HE WORE A HAT THE SIZE OF THE ROSE BOWL — This Newhall lad lived at the corner of Market and Walnut streets and would later become the most famous man in the world. His trademark dashing designer cowboy duds, horsemanship and larger-than-life smile were just part of the package. In his final year, at the age of 60, he raced another cowboy celluloid legend, Hoot Gibson (who was also 60) in a chariot race through Newhall. The man was president of the local NRA (Newhall Rodeo Association!). He was friends with Wyatt Earp and Bill Hart, and died in a senseless car accident in Arizona. During his heyday, he was the No. 1 box office star in the world and made many of his films in his Santa Clarita home. We knew him as Tom Mix.

BANG FOR THE BUCK — During World War II, Bermite (the ordnance plant next to the present-day Metrolink station on Soledad) was one of the country’s biggest producers of munitions. It ran around the clock. Then, after WWII, shrunk down to more modest productions. When the Korean War started, it kicked into high gear, immediately employing 650 new workers on the day shift. It would eventually employ about 2,000 people during the height of that conflict.

ELIMINATE THE MIDDLEMEN? FEED THEM TO THE HOGS? — It was a complicated scenario of hog ranchers, crooked politicians and garbage czars. The plan of the three was to turn the SCV into the Southland’s major garbage dump and, to that end, they would move hundreds of thousands of trash-eating hogs to the valley to consume edible spoils. The first consignment was of 50,000 hogs to a ranch in Acton. Eventually, a swine fever disease and the politicians’ own ineptness and greed saved the SCV from becoming Trash Town, USA.

DARN THERMOMETER HIT US WITH A BALLED-UP FIST — Boy oh boy, we had a week. The mercury didn’t seem interested in dipping below 105.

ROLLERAMA. WASN’T THAT THE NAME OF TOM FREW’S GIRLFRIEND IN EIGHTH GRADE? — Two local young men held the grand opening to the Saugus Rollerama right next to the present-day Hertz at the Bouquet /Magic Mountain Parkway junction. Safeway employees Jim Walker and Jim Santo got the idea on a whim. They interviewed roller rink owners throughout Southern California and started investigating everything from where the heck to get the money to where the heck to get skates. Bobby Cheeseborough loaned them some money and provided the site for the rink, which still stands there today.

I SHALL NOT MAKE A COMMENT — Local sheriff’s deputies cited two political helpers for nailing campaign posters to telephone polls. Yup. The poor guys were Democrats.

AND BOY, WERE THEIR LEGS TIRED — Bob Fridrichsen and Rusty Wayman just returned from a 450-mile bicycle trip from Northern California down the Pacific Coast Highway 1. Rusty, by the way, is my former-brother-in-law. Fridrichsen? Not so much.

TOOK US LONG ENOUGH — The movement to form some sort of city or local government has been going on here for literally a century. Future mayor Carl Boyer held a meeting at his Del Prado rec room. It was about whether we should form a city. Trying to recall. Didn’t we?

THE LAST GRIZZLY BEAR DIES — Many a famous boxer has lived and trained in the Santa Clarita Valley. On the outskirts, up in Gorman 30 years ago this day, earthmovers knocked over the home of Jim Jeffries, turn-of-the-century heavyweight champ of the world. Known as “The California Grizzly Bear,” Jeffries spent his last years in that Gorman house, right before his death in 1953. The house used to sit on the Kinsey Ranch, off Highway 138. It was bulldozed to accommodate the new State Water Project, the 100-year-old boards used for firewood.

BAMBOO-ZLED — It was a most sad day for us old-timers. Thirty years ago, the Bamboo Cafe closed its doors. It was near the corner of present-day Lyons and San Fernando Road. Mr. and Mrs. Les Rozsa, who immigrated here from Hungary in 1955, ran the favored eating spot for years and were famous around town for their kind hearts to those indigents who couldn’t afford a hot meal. One of my favorite stories? Identical twin brothers who served in the armed forces during World War II ended up being chefs at the Bamboo and a couple miles down the street at the Saugus Café. Yup. A couple of coffee shops in town and the twins served IDENTICAL menus.

HOW ABOUT THOSE SOCIALIST POLICIES? — Archibald Gardner Dunn was murdered in El Salvador by communist terrorists. He was the former South African ambassador to El Salvador and had been kidnapped by rebels. His daughter lived in Valencia.

HECK OF A NAME FOR A PITCHER — Robert Vernon Walk had a heck of a career. He was a decent hurler for Hart High and College of the Canyons. This week 40 years ago, as a rookie Philadelphia Phillies pitcher, Bob won the opening game of the World Series. After bouncing around the bigs, he was traded and sent to the minors, where he led the Pacific Coast League in ERA and wins in 1985. Next season? He was back in the majors, throwing for the Pirates. Earned a trip to the All-Star Game. Non-committal baseball there-there pat on the rump, Bob!

Heck of a ride this morn, wasn’t it? Just tie your mounts to The Mighty Signal’s hitching post. We’ll have Signal interns de-saddle, brush, comb and offer undeserved equine compliments. And maybe a carrot. Catch your friends, neighbors, mangy varmints and mangy varmint-ettes next week with another exciting Time Ranger SCV history adventure. Until then, vayan con Dios, amigos!

John Boston has been writing about SCV history for more than 40 years. Got some down time? You can buy Boston’s “Melancholy Samurai,” “Naked Came the Sasquatch” and other books on Amazon.com or https://bit.ly/John_Boston. Leave a review, if you’re amind. 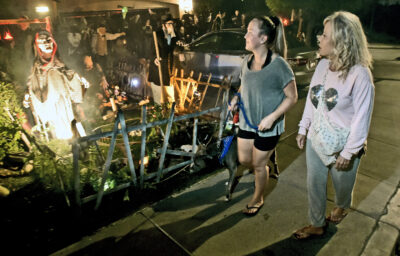 How are you Halloween-ing? The Signal wants to know