The following summaries were provided by team coaches and/or representatives for some of this past week’s Santa Clarita Valley prep sports action. The Signal thanks all who submitted for helping get the word out about local athletes’ achievements. In the event that both teams submit reports on the same event, the reports will be edited to combine them into one summary:

The West Ranch boys soccer team lost their final regular season game at Valencia 1-0 on May 6. It was senior night at Valencia, which got a first-half goal from Marcel Palare for the game winner. Valencia had a chance to extend its lead in the second half on a penalty kick, but West Ranch goalkeeper Matthew Swanson made the save to keep it a one-goal game. Despite the loss, both teams will be going to the CIF playoffs.

The West Ranch girls lost their first game of the year at home to Valencia 4-1 on May 6. The Lady Wildcats, who clinched first place in the Foothill League after their May 4 victory, finished the regular season with a 7-1-2 record. It was senior day at West Ranch, which got its only goal from Jenna Catalano. The Lady Vikings received two goals from Jordan Henderson and one goal apiece from Kaity Lee and Jackie Victorio. The Lady Wildcats will likely host a first-round CIF playoff game when the brackets are decided this weekend.

The Centurions faced off against Segerstrom High School in the Wildcard of CIF Division 3 playoffs on Tuesday. Saugus was able to clinch the match 15-3.

In singles, Saugus picked up six wins with No. 1 Emily Christensen sweeping. No. 3 Sherry Salonga also grabbed two sets and No. 2 Julissa Diaz won one.

Saugus was especially dominant on the doubles side of play, winning all nine sets.

“Everyone played extremely well today,” Saugus coach Bailey Sindle said. “We were aggressive from the start and that helped us get to an early lead. Doubles stepped up big-time, especially my No. 2 team of Riyana Chhabra and Chloe Hong.”

Hong started cramping early in the second round but battled with Chhabra to take the set, 6-1.

“My girls are fighters, and they never give up,” Sindle said. “I’m incredibly proud of their performance today.”

Saugus was set to play The Archer School in Round 1 of play Wednesday at The Warner Tennis Center.

Valencia saw the ball well, racking up 21 hits in the game. Scully, Seper, Snyder, Maia Paragas, Mertes, Bramson, and Mrakich all managed multiple hits for Valencia. Scully went 5-for-5 at the plate to lead Valencia in hits.

The West Ranch boys soccer team won its first-round CIF playoff game Tuesday at home versus Brentwood, 6-3. West Ranch jumped out to a 2-0 lead but Brentwood came back to tie it at 2-2 by halftime. The Wildcats pulled away in the second half to put the game away. Owen Strunck scored three goals to lead the Wildcats. Joshua Swanson, Charlie Spare and Daniel Bebekian each scored one goal apiece.

Coach Matt Gale carried his winning streak into the first round of the playoffs as his SCCS Lady Cardinals beat Oakwood, 4-0 at The Master’s University on Wednesday. Briley Phelps led the team in scoring with two goals and an assist. Elly Edwards added a goal as did Lexi Kostjuk. Goal keeper Kaylee Clark got the shutout. 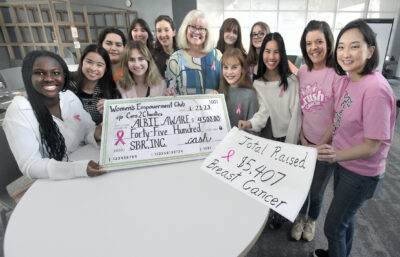 Heartbreak and passion: Women’s Empowerment Club raises $5,407 toward the fight against breast cancer