Slowly but surely, we are sneaking out of this dry summer toward fall. While thermometer scientists are predicting a third-straight La Niña and its stinginess in the Heavenly Water Department, at least with upcoming fall, it won’t be 500-something-degrees outdoors.

C’mon. Hop in the saddle, you yuppie bunk huggers and grizzled old-timers who’ve been up since the crack of 3:30. Perfect day to disappear into the back canyons of Santa Clarita lore and history. We’ve a pretty darn interesting trail ride ahead, from evil villains to interesting local cocktail party trivia. Please supply your own sleazy saxophone music for background atmosphere.

Shall we mosey into the mystic?

MONDAY’S TACO NIGHT, TOO. SERIOUSLY! — Back on Aug. 24, 1878, the Lake Hughes Post Office was dedicated. Today, Lake Hughes is famous for the historic Rock House Inn. For a long time, it was owned by 1970s character actor Paul Koslo. Besides being an eclectic little hotel, it’s also a saloon and four-star restaurant. Great destination for a half-day road trip.

NO SHIP. — Aug. 25, 1845, the Rancho del Buque was granted to Frenchman, Francisco Chari. (Chari changed his name from Francois to pass as Spanish.) Chari, a former sailor, named his big cattle spread in Bouquet Canyon the Buque Ranch after the French word for “ship.” American cartographers came along after statehood, thought “buque” was Spanish for a bunch of flowers, and renamed the canyon, “Bouquet.” It’s our oldest typographical error.

COPS & WRITERS — It sat at the corner of 6th and today’s Main Street and for years, was one of the cornerstones of the SCV. On Aug. 26, 1926, the Newhall Sheriff’s Sub-Station was dedicated. The building is still there and is part of the Canyon Theatre Guild. I guess I always knew I’d end up behind bars. It used to be my office, too, back in the 1970s.

SO YOU THINK IT’S HOT AND DRY NOW? — The 21st major brush fire of the summer burned out of control in Lake Elizabeth. We had six different fires going at the same time this week 100 years back.

BEEN SAYING IT FOR A CENTURY: DON’T DRINK AND DRIVE — Mothers who lost loved ones were speaking in Newhall. Long before Mothers Against Drunk Driving (MADD), these moms were from the Anti-Saloon League.

LOVE TO SEE THE SIGNAL’S COMMENTS SECTION IF WE PENNED THIS TODAY — We’ve penned some rather interesting and controversial editorials over the years. This one is at the top of the list. On this date, The Mighty Signal endorsed the Ku Klux Klan. “The so-called atrocities that are being committed by the Ku Klux Klan do not seem so cold-blooded or unjustifiable when one digs down underneath the surface for the prime motives of their actions,” penned a distant Signal editorialist. “It took the hanging of three gangsters in Frisco a while ago to get the law machinery working as it should.” The Signal applauded the “…old law of the West that a man must pay with his life for the honor of a woman.” Furthermore, the editorialist wrote: “If the Ku Klux Klan are going to make it their business to cope with the booze runners, kidnappers, white slave artists and others who work in the dark, we say, hop to it, Ku Klux Klan and maybe the Legislature will wake up and give us a state police.” On some dark note, the editorial must have worked. We did end up getting a state police. In the 1920s, we had our own presence of the KKK here. They were frequently seen picnicking in the SCV and when our sheriff, Jack Pilcher, was accidentally shot to death, the Klan sponsored his funeral in a big parade through town. “Hop to it, Ku Klux Klan”?

NO RELATION TO DOOGIE, AND, FRANKLY, THE LAST NAME’S SPELT DIFFERENTLY — The Hauser Ranch up in the north end of Pelona Valley was raided by federal agents and local vice cops. It was a front for a huge moonshining factory. Law enforcement agents raided the ancient Hauser barn and found two epic vats of sour mash brewing — one holding 5,000 gallons, the other twice as big.

GARDNER SEASON? WABBIT SEASON? — Definitely, it was Gardner season. Wealthy retiree Carl Gardner went out before dinner on his large Saugus ranch to go rabbit hunting. He never made it back for supper. Police later figured out he was carrying his gun barrel up and cocked. The trigger snagged in some brush, went off and sent a bullet clean through the hunter’s head, killing him.

WOULDN’T MIND AT ALL IF IT RAINED EVERY DAY OF SUMMER — I’m not betting the ranch on this, but I think this was a record for August rain in the SCV. We had two rare, back-to-back late-August storms roll through the SCV, dropping 1.04 inches in the first rain and 1.57 in the second. Both measurements were taken at the Saugus train station. That 2.61 inches was a big wallop for August. Despite the cloudbursts, there was no building damage from the local flash floods, but, the storms did damage many crops. Interesting tidbit: The rain surprised many a local. Back before air conditioning, folks used to sleep outside during the hot August nights. Hundreds of Santa Claritanites were camping out when the rain hit and had to run for shelter, dragging their wet bedding.

ONE OF THE MOST IMPORTANT DATES IN HISTORY — On Aug. 27, 1933, Atholl McBean was named president of The Newhall Land & Farming Co. McBean may be the most influential local person of the 20th century in that he essentially saved NL&F from bankruptcy and built it into one of the state’s most successful development operations.

WHY THANK YOU. I’D RATHER NOT. — Words had different meanings back in 1941. We ran a short-lived feature called, “Meet Mr. Homo.” It was a column about language.

EITHER ONE WOULD’VE BEEN BETTER THAN YOU-KNOW-WHO — On this date, Signal editor and publisher, Fred W. Trueblood, tossed his hat into the ring for the state Assembly race. He didn’t finish first. Fred wasn’t the only Signal editor to get bitten by the political ambition bug. Legendary wordsmith and dear pal, Scott Newhall, ran for mayor of San Francisco. Scotty, too, lost.

SPEAKING OF FRED — Signal Editor Fred Trueblood lamented progress and over-development. Several of the old wooden buildings had been destroyed, replaced by “modern ones.” Trueblood recalled when half the main street in Downtown Newhall didn’t have sidewalks and there was a lake in front of Newhall Hardware.

DESTRUCTION OF OUR HISTORIC HOTEL — One of the causes of Fred’s lament was the razing of the historic Soledad Hotel in downtown Newhall. Locals crowded the streets to watch the deconstruction and noted that the ancient 2-by-4s actually measured 2 inches by 4 inches. That building was originally constructed in the early 1880s by Mr. Hardison and a Mr. Stewart as a warehouse. It had actually been built about 200 yards up the road, by the old train station in Newhall, and the partners moved it. After Hardison and Stewart moved to Santa Paula to start a new company (Standard Oil of California), the building was used as a residence for a number of families — the Waldies, Larkeys and Bryants. The Newhall post office, which had been in the old Campton General Store, was moved to the abandoned warehouse during the Cleveland administration, then moved back to Campton’s after Grover left office. It became a boarding house, operated by George Ashbridge. In the early 1920s, the place was bought by Mrs. Frances Phillips (credited with owning the first auto in the SCV). She ran it as a boarding house for years and then, it was turned into the Hotel Soledad. It was abandoned in the 1930s. Today, our beloved cowboy coffee shop, The Way Station, sits on the foundation.

LAKE HUGHES ON FIRE AGAIN — More than 9,000 acres in the Lake Hughes area burned and along with it, the fire look-out tower in Grass Valley. Exhausted firefighters battled the blaze for a week.

SEEMS … IRONIC? — Longtime community leader and native Dutchman Theodore “Ted” Kornelissen died 60 years ago this week. Ted delivered the first-ever supply of gasoline into the Antelope Valley around the turn of the century. He delivered the gas in wooden barrels on a wagon pulled by mules. (Gasoline at local stations was poured straight from the barrel.) Ted also was the SCV’s first letter-carrier, although most untrusting locals would ride into town every once in a while to pick up their mail.

A BLAZE MOST EPIC — A great fire roared through Placerita Canyon, burning the historic Gene Autry Melody Ranch to the ground and all the sets inside. With smoke still rising, a few days later it was estimated the conflagration consumed 17,200 acres. Just a few days after the inferno, producers from a hit TV show used the smoldering ranch to film a war movie. Melody Ranch was later sold to the Veluzat family, who placed ads in the Hollywood trades, asking for people who might have photographs of the old set (where hundreds of movies and TV shows were filmed, including the opening of “Gunsmoke.”). The Veluzats then carefully rebuilt and restored Melody Ranch from scratch and, today, it’s one of show business’s most thriving movie locations.

HAPPY BIRTHDAY, YUPPIES! — On this date, the planned community of Valencia was dedicated. New homes sold for about $25,000. They’ve gone up 10-fold in the past 34 years. An interesting tidbit — former Signal Publisher Scott Newhall came up with the name of Valencia. In an odd coincidence, Scotty had no idea that Valencia, Spain, was the birthplace of the first white man to set foot in the SCV — Gaspar de Portola.

ALL IN THE FAMILY — A half-century back, Ken Como escaped from the L.A. County Hall of Records. Como had been pulled from Folsom Prison so he could testify against an old “sort of” family member. The “sort of” family member? Charles Manson. Como, by the way, had been arrested in Newhall three years earlier for attempted murder on a local motel owner.

HAVING FUN, FOR ALL OF 20 MINUTES — For years, hot rod enthusiasts used to motor all the way down to Van Nuys Boulevard in the San Fernando Valley for Cruise Night. On this date, 40 years back, some hot-rodders tried to make Lyons Avenue the SCV night spot for muscle cars. Highway Patrol and local sheriff’s deputies rode shotgun on the kids, making sure no one loitered, bumped the speed limit or displayed signs of happiness. About 200 young folks lined Lyons. No arrests were made, but the sheriff’s controversial Special Enforcement Bureau handed out 92 citations, including jaywalking and broken taillights, which several locals claimed the SEB broke. That incarnation of the SEB would eventually be disbanded for its overly forceful manner in beating up a few decent honor students for no particular reason at all. Part of the reason why the SEB was disbanded? In a front-page editorial, Signal Editor Scott Newhall called the cops: “…jack-booted thugs” and pointed out the heavy-handed treatment of locals.

Drat if we haven’t come full circle. That’s our own signature time continuum genuine SCV vortex up ahead. Sure hate to say adios, but it’s time we part company. On the bright side, I’ll being seeing all y’alls back here at The Might Signal’s hitching post in just seven days. Until then — vayan con Dios amigos!

We know. We know. It’s… getting … closer…! Boston has launched his own publishing house, John Boston Books. The first is a three-volume set is “Ghosts, Ghouls, Myths & Monsters — The Most Haunted Town in America.” That’d be us. In the meantime, you can buy Boston’s “Melancholy Samurai,” “Naked Came the Sasquatch” and other of his books on Amazon.com or https://www.amazon.com/John-Boston/e/B000APA0H8?ref=dbs_a_mng_rwt_scns_share. If you liked the book, would you mind leaving a kind 5-star review…? 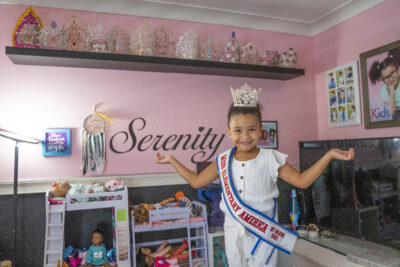 The beauty and brains behind pageantry 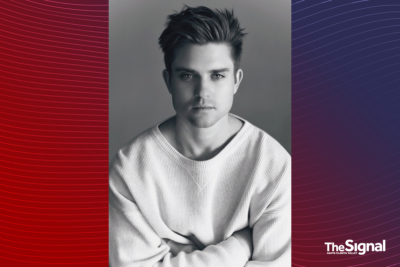 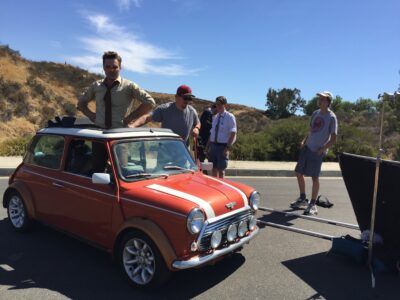 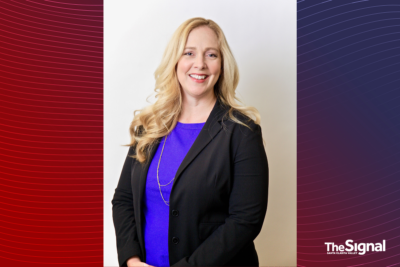 How they hope to help feed the need