‘I don’t see a downside’

Five times a week for the last five years, Royce Smith stands ready at 5 a.m. to start his day at Results Fitness in Newhall.

Sometimes, he even gets there before the staff.

“The other day, he was the first one waiting for me,” said coach Sawyer Gordon.

That level of commitment has kept Smith, who turns 75 next week, in tip top shape.

From lifting his own body weight multiple times during TRX exercises or adding additional pounds as he performs a series of pushups, Smith enjoys it all.

“I feel healthy. It’s a good life instead of being a couch potato,” he said.

Smith falls far from that scenario.

In December, he competed in Reebok’s Spartan Race at Castaic Lake and handily won the over 60 division for the Ultra Beast, which includes 26 miles of course and more than 60 obstacles such wall and rope climbing.

Gordon, who regularly coaches Smith, called him a “bad ass.”

“He does things younger people don’t do,” Gordon said. “Most of my friends in their 20s wouldn’t take on a Spartan Race.”

December was Smith’s second Spartan competition but it won’t be his last. He’s eyeing a Spartan event in Los Angeles this August.

Smith credits Gordon for keeping him on track.

“She corrects me the most out of all the coaches here. Sometimes I have memory issues,” he said.

Craig Rasmussen, fitness manager, has been writing Smith’s workout programs since the beginning.

“We have a pretty good percent of senior clients. The key is consistency and Royce is at the top of the class. He’s like clockwork,” Rasmussen said.

Committing to fitness is a major plus for all people but has extra benefits for those over 55.

“One of the biggest things you hear about with seniors is muscle loss, which is a real concern,” Rasmussen said. “Regular training helps stave that off or even help gain muscle mass.”

Loss of balance can be another concern.

“Working out can help with fall prevention by creating a faster reaction time to a very real concern,” Rasmussen said.

Like all clients at Results Fitness, Smith’s workouts are regularly updated to increase the difficulty level and continue to progress.

Smith loves the challenge and the camaraderie.

“I’ve only missed maybe two workouts in five years, unless I was on vacation,” he said. “I’m always meeting new people. I don’t go out a lot. I have a lot of good friends that I’ve met here.”

He fits in training along with two jobs. Smith has owned Appliances Unlimited in Newhall for 40 years and is also the president of United Stores, Inc.

“I might retire when I’m 85. I do take Sundays off, but then I work around the house doing whatever my wife wants. She lets me watch football,” he said with a smile.

The Valencia resident has been married for 53 years. His wife is also a fitness enthusiast.

“She does yoga and pilates,”Smith said.

Smith acknowledged that when their friends get together, talk often turns to ailments and other quality of issues.

“I have nothing to say. I’m probably the healthiest of my friends,” he said. “I know people who have given up and say their on the downside. I don’t see a downside. My goal is to live to see my great grandkids.” 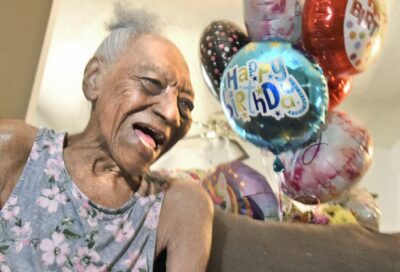 The Savvy Senior | How to Choose a Medicare Supplemental (Medigap) Policy

The Savvy Senior | Adaptive Clothing Takes the Stress Out of Dressing

Savvy Senior | Adaptive Clothing Takes the Stress Out of Dressing

The Savvy Senior | How to Get Underutilized COVID Funeral Assistance Funds