“Santa Clarita Valley seniors are so lucky to have an advocate like Peggy Rasmussen, who volunteers tirelessly on their behalf. Few would take on the monumental task of fundraising for a new senior center, let alone be able to successfully lead the effort.”

As the president of the board of directors for the Santa Clarita Valley Committee on Aging, Peggy Rasmussen spearheaded the effort to bring the more-than $11 million, state-of-the-art Bella Vida senior center to meet the expanding needs of our growing senior population.

This new center adds a 30,000-
square-foot senior center built with those changing needs in mind. It’s been built on a 2.5-acre site near the intersection of Golden Valley and Newhall Ranch Road, making it more centrally located relative to the valley’s population.

Due to the support Rasmussen has coalesced, there’s now a brand new center that delivers hundreds of meals to seniors in need, as well as offering them a place to get together and socialize, which experts say is just as important as a mental health component. Resources like Bella Vida help families in our community stay closer together, and the SCV owes a thank you to Peggy Rasmussen who played a pivotal role in making that happen.

In fact, in retrospect, it’s also significant to consider Peggy Rasmussen took over a senior center that was experiencing financial challenges, and helped find the people and lead the effort to completely turn around the Santa Clarita Committee on Aging.

Peggy took on the responsibility of the massive fundraising effort it took to get the more than $12 million necessary to build the 30,000-square-foot, state-of-the-art facility for seniors. Perhaps the most impressive accomplishment of the feat was coordinating on behalf of the community’s elders to have city, county, state, federal and private resources all coordinated under one roof. Such a feat is a rare achievement in and of itself, but to have it done on behalf of a legacy of service to the Santa Clarita Valley community is an incredible feather in the cap for anyone to be able to achieve.

Peggy Rasmussen’s commitment, generosity and dedication are just part of why she’s been able to get so much done on behalf of the community she lives in and loves, and for her work over the last few years, she’s owed a debt of gratitude that would be difficult to repay.

Peggy earned the top spot on the list for her work on behalf of others, a legacy literally in the center of the Santa Clarita Valley that people can point to for years as an example of what can be accomplished when a community sets its mind to achieving a goal and has the right person in place to do so. 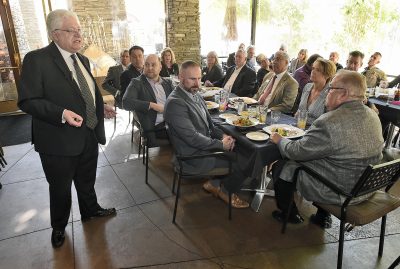