This new invention, television, made for a very nifty babysitter when mom was exasperated with us.

One of those classics was “The Addams Family.” Sight unseen, they were a normal suburban couple with two kids, a brother and a very large butler. But once you got a view of them, something was definitely wrong.

Gomez was a foil-wielding Spaniard who enjoyed instruments of torture. His wife, Morticia, was a tall, pale-skinned bombshell who barely stayed in her long black dress. The son, Pugsley, enjoyed destroying things while their daughter, Wednesday, was just odd. Lurch the butler was a very slow-moving Frankenstein’s monster.

My favorite scene was where Gomez pulled out the model train set, sent two trains on a collision course, and blew up the bridge where they met. Reminds me of Obama blowing up health care. But I digress.

The dark humor, frequent references to death, and the strange world perspective was refreshing. Viewers were “in on the joke” as “normal” people attempted to interact with the Addams clan. It made for very entertaining viewing.

The Addams Family started as a 1-panel cartoon but morphed into a television show, a couple of forgettable movies, and now a stage show.

Trish and I got the opportunity to see “The Addams Family” stage show over at our local hometown theatrical house, the Canyon Theater Guild, in downtown Newhall this past weekend. In the interest of total disclosure, the CTG’s executive and artistic director, TimBen Boydston, gave us a couple of free tickets, and I can never pass up a freebie. I’m such a sponge.

I won’t guild the lily and say that every CTG production is wonderful, because they aren’t. However, for a small production house, they do some impressive work and are able to showcase much of our local talent.

That being said, “The Addams Family” transcends everything we have ever seen at CTG. Directed by Ingrid Boydston, this production rivals anything put on by the big production houses in Los Angeles. No joke.

I went online to look at scenes from the original Broadway version of the production and was astounded. The CTG version was equivalent to or better in most aspects. Much better.

For example, the incomparable Nathan Lane plays Gomez on Broadway, the patriarch of the family. Most of our kids know Lane as the voice of Timon in the Lion King.

Atlanta transplant Brandon McCravy plays Gomez at CTG and is superior. Lane is unconvincing as a Spaniard where McCravy nails it. The guy could play the Spaniard in Princess Bride and not miss a beat.

On Broadway, Morticia is played by Bebe Neuwirth, who gives a deep-voiced sarcasm that is very entertaining. But CTG’s Savannah Marie captures the true dark, brooding and aloof Morticia from TV with a cunning twist of self-deprecating humor.  Marie wins in my book.

The part of Wednesday is played at CTG by Skylar Cutchall, who delivers a performance that brings a new depth to a throw-away character from the original TV series. Ms. Cutchall appears to have a very bright future ahead of her.

The easiest job on the show has got to be Alex Britton’s role of Lurch. He moves around very slowly and says nothing for nearly the entire production – then he belts out an impressive tune. It was one of the most delightful moments of the production.

And we really need to give a shout-out to the choreographer, Annette Sintia Duran. YouTube showed how Broadway professionals handle dancing, but Ms. Duran took those moves and taught them to our local talent quite successfully.

In fact, if I can fault small-town productions on anything, it’s usually choreography. Getting people to move together in some semblance of grace and order is very tough. Just ask Trump about coordinating Republicans on anything useful. Maybe we should send Duran to Washington?

Overall, I would have to give this production an A+ as I was delightfully surprised by the production values, the quality of the singing/acting, and stagecraft.

Congrats, CTG, on a wonderful production and restoring my faith in Western Civilization. “The Addams Family” will be playing at CTG in downtown Newhall through the end of October.

Steve Lunetta is a resident of Santa Clarita and fancies himself an amateur entertainment critic. But not a very good one. He can be reached at [email protected]. 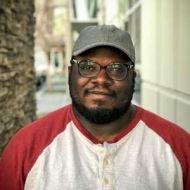