As the two-year legislative session came to a close, Californians were left scratching their heads wondering why the Legislature continues to ignore our state’s challenges while pursuing policy objectives as mythical and unreachable as the unicorn.

While I respect my colleagues across the aisle, they missed the mark on what’s important to the millions of Californians trying to raise their kids in safe neighborhoods, commute quickly to work and put a roof over their heads.

High electricity rates, ever higher gas prices and unaffordable housing occupy most headlines in the Golden State. Democrats in Sacramento cater to coastal elites and treat ordinary Californians as guinea pigs in a laboratory for social engineering experiments.

Take for example the new, much ballyhooed law that mandates California produce 100 percent of our electricity from renewable sources. The aspirations behind the law are completely supportable, but the technology simply does not exist to implement it, leaving our homeowners and businesses to shoulder the cost.

California is already paying Arizona nearly $2 billion a year to accept our excess solar energy. When the government sets mandates, it needs to have a plan to pay for them.

We should be looking at policies that reach this goal without crushing the middle class and preventing millions of Californians from climbing the economic ladder in the process — not “feel good” policies that please the political elite.

I was pleased that Gov. Jerry Brown signed my legislation, Senate Bill 1199, which will require released sexual predators to return to their community of origin, rather than being dumped into rural areas like the Victor and Antelope valleys. That’s definitely a step in the right direction, but communities in California are still reeling from the fallout of recent public safety experiments, which include shorter jail sentences and releasing more inmates from prison.

While crime rates continue to increase in many areas of the state, the in-crowd running the show in Sacramento focused on helping the criminal.

Earlier this year, a measure blasted by district attorneys throughout the state was pushed through, allowing defendants to use any treatable mental disorder as an excuse to have charges put on hold or outright dismissed. And let’s not forget Sacramento also eliminated California’s bail system and legalized heroin injection centers.

While the middle class in the rest of the country is prospering, California’s middle class is begging for relief from high taxes and runaway housing costs. In response, the majority party passed a 12-cent hike in the gas tax, along with “affordable housing” legislation that actually increases fees for folks buying homes.

And despite our expensive glut of solar power, the Legislature simply stood by when Gov. Brown-appointed bureaucrats mandated all new homes in California include solar panels, a policy that is estimated to drive up the cost of a new home by at least $9,000.

Common-sense reforms to the California Environmental Quality Act (CEQA) would go a long way to cutting the prices of new homes, but CEQA reform was pushed aside — unless of course a professional sports arena or stadium was needed. Once again, major sporting venues were given the green light to be built without adherence to the stringent environmental hoops homebuilders, businesses and average citizens have to jump through for even the smallest projects.

Those of us living in the Santa Clarita Valley are no strangers to long wait times at the Department of Motor Vehicles, but this year the irritating wait grew by hours and hours.

The public outcry was loud – deservedly so – but when Republicans requested an audit to find out where the millions of dollars sent to DMV to extend office hours and hire personnel had gone, legislative Democrats said, “No!”

They also blocked an effort that would have offered relief to residents having to wait six hours or longer at the DMV, preferring instead to give the behemoth bureaucracy a blank check with no accountability.

People pay their taxes in the hopes that government will deliver a great education to their children, protect their neighborhoods and provide necessary infrastructure like good roads and water delivery systems.

They get frustrated when their hard-earned dollars are wasted on unicorn projects and experiments that fail to fulfill the utopian vision Sacramento political elites dream about.

I share that frustration. We need better balance in the Legislature so we can develop bipartisan policies that will lead to common sense and longer-lasting solutions. 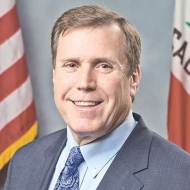