I love campaign literature. Somehow, I got on the Democratic Party mailing list so now I get both red and blue mailings.

A couple years ago, I gave Christy Smith her legendary label “Dirty Christy” after she repeatedly used dirty campaign tactics against her opponent, Dante Acosta.

Do you remember? The famous one was Dante in a darkened and airbrushed mailer looking like a prison inmate asking if your daughters were safe.

That one was a hoot. Laughed about it for days. I’m sure Dante and his wife didn’t.

I’m having fun with it this time, however. Here are a few pieces that we recently received. 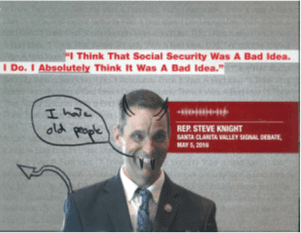 This piece came from the House Majority PAC. It’s so nice for those folks to think of us here in Santa Clarita. What I can’t figure out is why the Republican Party would send this to me. After all, they are the majority in the House, correct? 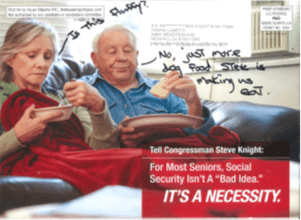 This was on the back side. I think it’s reprehensible that Steve Knight is making these people eat their cat. Is there no civility in this world anymore? 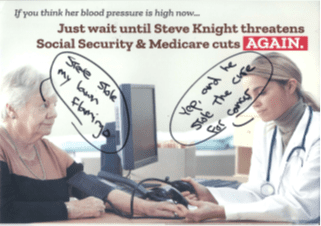 House Majority PAC again. Dammit, Knight! You stole this lady’s lawn flamingo? Did you give it to President Trump to place in front of the White House? Yeah, you are quite a clever guy.

But, if it helps get us that blasted mine shut down, I’ll send him a flamingo myself.

And you took the cure for cancer? Did you give it to Deadpool to hide with the cure for blindness? Steve, you are a very dark guy. 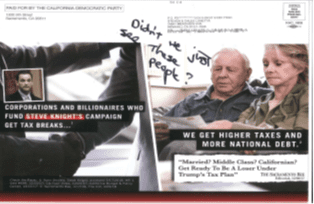 This is from the California Democratic Party and has a Katie Hill promo on the back. Wait — those are the same people that we saw eating their cat! Could this be a concerted effort to attack Steve Knight coming from front organizations for one main group? Katie, did you do this? 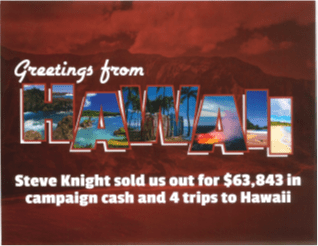 I was so excited to get this postcard from Hawaii! Tropical beaches, surf and volcanoes. Dang, who would want to go to Hawaii now? Sounds like a hell-hole. It’s so nice that the California Democratic Party keeps such close tabs on Steve’s vacations.

Maybe they are watching you on your vacations. Creepy. 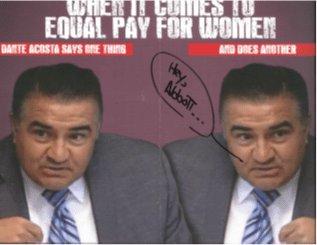 This is one of my favorites. I find it such a coincidence that Christy Smith’s campaign literature always seems to show up on the same day as the Acosta hit pieces. And they are all exactly the same size. Yet, they come from different sources. Hmmmm.

I like Dante a lot. But, let’s face it, folks. He bears a striking resemblance to Lou Costello. Abbotttttt.

I could go on but, frankly, there is just too much. After I heard pledges from many of the candidates (notably, Katie Hill and Christy Smith) that their campaigns would be clean and free of negativity, this stuff is very disappointing.

And, yeah, I might have altered them a bit myself.

So, Santa Clarita, you get to decide some very important matters in November. Let’s hope and pray that we will be influenced by fact and truth, not dirty campaign literature in our mailboxes.

Steve Lunetta is a resident of Santa Clarita and greatly enjoys the Democratic Party literature. Send him more! He can be reached at [email protected]