A recap of recent sports results. Got results and summaries? Email them to [email protected]

The following summaries were provided by team coaches and/or representatives for recent Santa Clarita Valley prep sports action. The Signal thanks all who submitted for helping get the word out about local athletes’ achievements. The following summaries are presented in chronological order of the games’ dates. In the event that both teams submit reports on the same event, the reports will be edited to combine them into one summary:

In the second game of the Foothill League season on April 9, the Lady Cents welcomed the Hart Indians to Saugus High and in a hard-fought game the Centurions came away with a 2-0 victory. With the Saugus win, Hart suffered its first loss in Foothill play in eight years.

The Centurions got on the board in the first half when there was a shot taken and a Hart player was called for a handball in the box. Alyssa Edwards stepped up to take the penalty kick and put it in the back of the net.

The second half would see both teams getting chances, and with about 10 minutes to go in the game Edwards struck again. This time it was a pass from Ryan Shepherd that set up a perfect shot to the corner of the goal and the Centurions led 2-0.

With 8 minutes remaining in the game, the Centurions were called for a foul in the box and Jensen Shrout stepped up to take the penalty kick. Saugus goalkeeper Rebecca Lim guessed correctly and made a great save, and the Centurions hung on the rest of the way to secure the 2-0 victory.

The Centurion “D” was led by Lizzie Edwards, Micah Sheff, Kacie Robinson, Alina Bench, Natalie Quezada and Presley Williams. The Centurions move to 1-0-1 on the young season and will take on a very good West Ranch team Tuesday.

The Knights were led by John Cervantes King with 16 points, 5 rebounds, 4 assists and 4 steals. Other leaders included Will Yunbar with 15 points, 14 rebounds and 2 blocked shots. Bram Yoo scored 11 points with 8 rebounds and 3 assists. Hunter Gillman chipped in 10 points with 4 rebounds. Trinity was next set to play rival Faith Baptist on Friday night in Santa Clarita.

SCCS girls soccer went to Tesoro Park Monday to play Trinity and came out with a 17-0 victory. Nine different players scored for the Cardinals, who hit their stride and moved to 4-0 on the season with the win.

Saugus played extremely well in their victory over Golden Valley on Monday. The Grizzles were down a man and had to default their No. 3 singles position on the day.

From coach Bailey Sindle: “I don’t think the score reflects how close some of the sets were. Golden Valley has a strong No. 1 singles player who pushed my three singles kids. All the matches were high-intensity and fun to watch. The No. 1 and No. 2 doubles teams were also very talented.”

The match was very tight in all three rounds on Tuesday. Saugus singles No. 1 Emily Christensen swept her three matches, No. 2 Julissa Diaz picked up a win, and No. 3 Sherry Salonga won two of her three sets.

On the doubles side, Saugus No. 1 doubles team of Brianna Cervantes and Natalie Ratzlaff won two of their three sets.

With only four matches left being played on the day, Saugus needed all four courts to tie the match at 9-9, which would lead to counting individual set scores to determine a winner. Saugus picked up three of the four wins but lost the last match being played, which secured Hart a 10-8 victory.

From coach Bailey Sindle: “The match was incredibly close all day. A lot of the sets were so close and could have gone either direction. We lost some critical sets today that we should have won. It’s tough because Hart and Saugus are known to compete for a playoff spot each year. I feel confident that we can bounce back and secure the win in a few weeks.”

The Saugus softball team earned a road victory against Canyon, 15-0 on Wednesday. Junior pitcher Alyssa Ramirez pitched a great game as she threw a no-hitter with nine strikeouts and one walk. Senior Allie Enright had 3 RBI, all of which came via two home run shots. Sophomore Hailey Salgado went 3 for 4, including a double, 4 RBI and 2 runs. Sophomore Shae Sabedra went 3 for 4 with a double, 2 RBI and a run. Senior McKenna Gibson and sophomore Ashlynn Kovach each had a double while defensively played great. On the base paths, Maddie Campeau stole six bases on the day.

Maia Paragas came to the ballpark and meant business on Wednesday, driving in four on three hits to lead the Valencia Vikings varsity past Hart 10-1 on Wednesday. Paragas drove in runs on a double in the fifth and a triple in the sixth.

Casey Edwards was credited with the victory for Valencia. She went seven innings, allowing one run on five hits and striking out eight.

A hard-fought game took place at Vasquez High School between league rivals on Wednesday. Vasquez scored first and then SCCS followed with five unanswered goals. This moves SCCS to 5-0 on the season, 2-0 in league. Senior Elly Edwards got the Cardinals on the board and had an additional goal in the second half. Senior Sydney Boswell also had 2 goals and sophomore Briley Phelps had 1 goal and 2 assists. Freshman Kaylee Clark added an assist. SCCS plays Palmdale Aerospace on Wednesday. 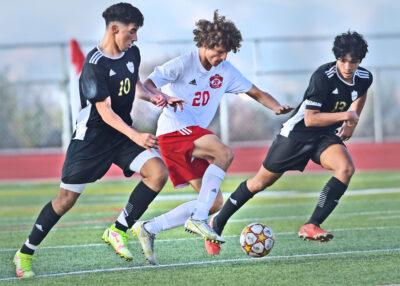