Carl Kanowsky | The Family and Wines of Saxum’s Justin Smith

This comes across in so many ways.

For instance, his dad’s mother’s maiden name is Stone. This inspired him to call his winery, Saxum, which is Latin for stone. “It’s a tribute to my family.”

His dad, James Berry Smith, still works at the winery and in the vineyard. And he makes his own wine in a most unique and elaborate way. For instance, he puts the harvested fruit gently in a tank, but he does not crush the fruit. He simply allows carbonic maceration (over a period of three weeks) to provide the juice for his wine. Justin reveled in describing the entire process, which went much further. Sadly, we did not experience any of James’ creativity – maybe next time? But dad’s R&D efforts in making wine inspires Justin to experiment.

He and his wife, Heather, have three kids. Their oldest, Collin, starts working there next year. All three have helped out in one way or another. And the kids’ connection led to the unique wine labels common on Justin’s bottles. His kids have a local art teacher, Joe Kalionzes. Justin commissioned Joe to design the labels. Go grab a bottle and see some of the iconic designs for yourself.

That reminds me – I still have three wines we tasted that we haven’t discussed.

Our next wine was the 2019 Booker. As you’ll recall, Booker is the vineyard/winery owned by Eric Jensen. Justin helped Eric locate Booker’s home. In return, Justin’s been working 4 acres of vines there, putting his stamp on Eric’s fruit. Sadly, 2019 is the last year for a Booker from Saxum.

So, you need to get yourself a bottle of the Booker 2019 when it’s released. And not just because it’s the end of an era, but because it’s delicious.

It delivers aromas of black berry, cherry, cinnamon and nutmeg. The blend, two-thirds syrah and one-third mataro, combines for a spicy package. Justin thinks using amphoras in the production of this wine gave it that character. “The concrete gives it a completely different dimension.” This wine proves the adage that each drinker’s experience of a wine is quite personal. You see, I got a lot of spice, particularly pepper, but Terry found it lacking the pepper notes. But she did comment on the quite long finish.

And it’s delectable right now. Licorice, baking spices and dark fruit on the nose. White pepper, cherry, slate, and, surprisingly, chocolate tastes. The acidity blends well with the tannins. An enticing long finish. This is going to be a champ.

Justin had been a cordial and engaging host. But he went a step beyond by opening a bottle from his library, a 2005 Bone Rock. This demonstrated what happens when a Saxum grows up. Now, let me caution you – a 16-year-old wine doesn’t taste or smell like a newborn bottle. Things have mellowed a bit, the nose is a little softer and may show signs of age, like a whiff of iodine. But by this point, the tannins have calmed down, allowing the fruit to provide a more blended package that has more dimensions. You can see why people will pay big bucks for a well-aged Saxum.

Overall, visiting Justin was like going to an artist’s workshop. You meet the artist and see the artwork. Justin, laid back but justifiably proud of his product. His wine speaking for itself – proclaiming, “Try me – I think you’re going to swoon.” And swoon we did, with both Justin and his fabulous wine. 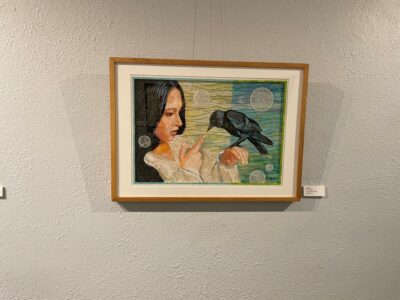